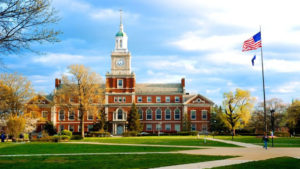 Author and philanthropist MacKenzie Scott said Tuesday she is making what is the largest-ever single donation in the history of Howard University.

The former wife of Amazon.com Inc. (NASDAQ: AMZN) founder and CEO Jeff Bezos said she would commit $40 million to the historically Black college in Northwest D.C., part of a multitude of donations she outlined in a Medium post published Tuesday.

Howard said the gift would go toward ongoing campus improvement and renovation projects, a professional development plan for its faculty, and to develop a program on social innovation and entrepreneurship focused on the financial wellness of the university’s community. The donation will also help underwrite an existing Howard program that provides 100% matching funds for students who receive the maximum in federal Pell Grant funding. Created in 2014, the program is designed to remove barriers to college success and keep students enrolled.

“Thanks to Ms. Scott’s gift, and the accompanying positive publicity, we hope that other donors will follow her example to lift the financial burden off of deserving students and help make ends meet so they can focus on graduating on time,” Howard President Wayne Frederick said in a statement. “With this unrestricted donation, we now have the opportunity to expedite our efforts and fund the initiatives in a way that will reap benefits for generations to come.”

Scott’s gift quadruples what was previously Howard’s largest-ever single donation, a $10 million gift from the Karsh Family Foundation in January to expand a program for science and technology scholars.

Scott said Tuesday she has opted to drop the last name of her ex-husband in favor of her grandfather’s surname. She has now donated roughly $1.7 billion of her personal fortune since May 2019, when she made a commitment to donate much of her personal wealth.

Howard said Scott is a former pupil of novelist Toni Morrison, a Howard alum and former English professor there.

Locally, Scott also gave some of her funding to the NAACP Legal Defense and Educational Fund, Voter Engagement Fund and Thurgood Marshall College Fund, the latter of which declined to specify her dollar contribution. We’ve reached out to the other two for more information and will update this when we hear back.