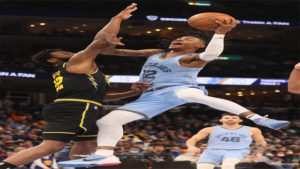 The heavyweight battle between the Memphis Grizzlies and Golden State Warriors lived up to the hype Tuesday night. The Grizzlies took a 13-point lead near the end of the second quarter. That swung to an eight-point Warriors before the halfway point of the third quarter.

Both teams kept trading baskets as a sellout crowd created one of the best atmospheres at the FedExForum this season. Ja Morant made back to back shots late, the crowd chanted “MVP,” and the Grizzlies defeated the Warriors, 116-108.

Six Grizzlies scored in double figures. Desmond Bane had an uncharacteristic 3-for-14 shooting performance, but rookie Ziaire Williams stepped up to score 17 points on 6-for-12 shooting. Brandon Clarke was strong off the bench with 14 points and nine rebounds.

Williams spent a lot of time guarding Stephen Curry and had success. Curry finished with 27 points, 10 rebounds and 10 assists to record a triple-double, but Williams and De’Anthony Melton spent most of the game forcing him into tough shots. Curry shot 8-for-21 overall and 2 of 9 from 3-point range.

The excitement after the game was noticeable. Jaren Jackson Jr. was dancing, Morant was jumping with joy and Rajakovic walked into his postgame presser in a soaked Memphis Grizzlies shirt.

“This is what we do, man, we’re just enjoying it,” Jackson said. “We have a forward mentality, but we’re in the present. We get what’s going on right now.”

Here are some observations from Tuesday’s win:

Morant had one of his best first quarters this season when he poured in 15 points on 6 of 10 shooting. Things got tougher after that as Warriors coach Steve Kerr matched up Gary Payton Jr. on Morant. Like his father was known to do, Payton made Morant work for every point. He started the third quarter and was the main reason why the Warriors re-gained the lead after trailing by 13 points.

Morant had his time to adjust, then the fourth quarter came. As Morant checked in, Payton sprinted down the Warriors’ bench to the scorers table. It was game time. Morant got the last laugh as he blew by Payton. Then when Payton recovered, he stopped suddenly for his patented floater.

“I just like having that pressure,” Morant said. “I feel like that’s when I shine the most. I like to be the one to take that shot, make or miss.”

Morant finished with 29 points on 11-for-23 shooting and added eight assists.

Two-point guard lineup wins
Tyus Jones has been playing more with Morant during the Grizzlies’ winning streak. That time built up for Tuesday’s big moment. Rajakovic opted for a two point guard lineup in the closing moments to add another ball handler on the floor. Jones replaced Williams. He made back to back 3-pointers late in the fourth quarter to send the FedExForum into pandemonium. He finished with 17 points and made all five of his 3-pointers.

Having Jones become a more aggressive scorer has been one of the underlying reasons of why the Grizzlies are surging. Morant and Jones make up one of the league’s best point guard duos.

“We were talking on the bench, Brad Jones and myself, (about) should we play him more in the first half with Ja,” Rajakovic said. “We needed another ball handler on the floor and Tyus did an outstanding job. Offensively he got us organized, but also, he did a good job defensively.”

Andre Iguodala’s return
It’s been two seasons since Andre Iguodala essentially refused to play in Memphis after being traded to the Grizzlies. The fans didn’t forget.

Iguodala was booed when he checked into the game and every time he touched the ball. When he committed his first foul and complained, it might have been the loudest moment of the first quarter. Iguodala threw an alley-oop to Payton late in the third quarter where he looked at the fans on his way down the court.

Next up
The Grizzlies have a home back to back against the Minnesota Timberwolves and Dallas Mavericks starting Thursday. Both teams are playing their basketball. The Timberwolves are on a four-game winning streak, and the Mavericks have won six straight.

MORANT:Memphis Grizzlies’ Ja Morant is bursting into an NBA superstar. Here’s how we know

SURGING:Ja Morant and the Memphis Grizzlies have gone national, and they may never go back | Giannotto