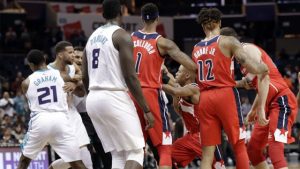 These are angry times in the National Basketball Association. We’ve got players and referees at one another’s throats. Dudes are getting suspended for postgame raids of opposing locker rooms. Everybody hates Austin Rivers. And now, yet again, we’ve got players squabbling, getting physical and generally causing a ruckus.

On Wednesday evening, it was the Washington Wizards and Charlotte Hornets getting frisky in the fourth quarter of a blowout. The Hornets had annihilated the sleepwalking Wizards, putting up a franchise-record 77 points in the first half and leading by as many as 28 due to a balanced effort that saw seven Charlotte players score in double figures.

With the Hornets leading 123-99 and just over four minutes remaining, Wizards big man Jason Smith set a stiff screen on Michael Carter-Williams, which the Hornets guard did not appear to appreciate. After a driving layup by Washington’s Chris McCullough, Carter-Williams and Smith got tangled up fighting for rebounding position; as Carter-Williams hit the floor, he appeared to pull Smith down with him.

As they got to their feet, MCW immediately began to rush over to get into Smith’s face. A scrum ensued, with players from both sides and referees getting in the middle to try to prevent anything from escalating. One Wizard, reserve point guard Tim Frazier, seemed especially aggrieved by the incident, continuing to try to break free so he could go after Carter-Williams. Multiple referees and coaches worked to restrain Frazier, who continued to jaw at Carter-Williams and the Hornets from across the floor as he was steered back to the Wizards’ bench.

After further review, the refs decided that while no punches were thrown, or even really suggested, Carter-Williams and Frazier should both be punished for the scuffle, with both getting slapped with a pair of technicals and ejected. That makes them the eighth and ninth NBA players ejected from a game in the last three days. It’s starting to feel like the entire league could use some anger management classes … or perhaps a “sim until the All-Star break” option to get some people to some warm, sunny locales for a few quiet days of recharging.

Here’s the thing, though: while Smith escaped without a T or an ejection, he did get whistled for a personal foul for knocking Carter-Williams to the floor. With Carter-Williams ejected, though, somebody else needed to take the free throws — and, per NBA rules, Wizards coach Scott Brooks got to pick which Hornet would head to the line.

Naturally, Brooks’ choice was clear: Charlotte center Dwight Howard, shooting a lowly 52.8 percent from the stripe this season. The choice sent a charge through the fans in the stands at Spectrum Center, one that kept thrumming as Howard stepped up … and calmly knocked ’em both down:

this is a pretty awesome moment

– dwight gets picked by scott brooks to shoot 2 tech FTs (MCW was ejected)
– knocks them both down
– blows a kiss to the washington bench
– crowd goes nuts pic.twitter.com/vQG9eLY7J0

Dwight being Dwight, he couldn’t resist blowing a kiss to the Wizards’ bench on his way back on defense, or appearing to mimic Sam Cassell’s signature, um, englarged testicles dance after timeout was called:

Given the NBA’s track record for meting out punishment over this particular method of celebration, that means Howard will probably wind up facing a fine for what was an otherwise pretty decent moment. It will not be the stupidest thing he’s done to earn a fine this season.

In a way, Dwight’s dumb capper is kind of perfect, considering how we ended up here: a screen turning into a shove turning into a fight-that-wasn’t turning into seemingly unnecessary ejections that only underscore the ongoing tensions between players and refs as the NBA wends its way through the cold and brutal month of January, a month where everyone’s on edge and nobody seems particularly happy.

Oh, well. At least nobody tried to bum rush a locker room after this one.