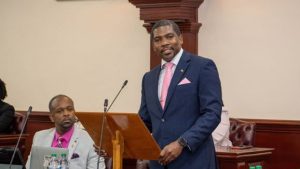 Over 2,000 frontline workers in St. Kitts and Nevis received an honorarium of $2,000 this month (October) in recognition of their sacrifice and sterling service during the COVID-19 pandemic.

Prime Minister and Minister of Health, the Honourable Dr. Terrance Drew, said that paying an honorarium to frontline workers was a priority for his Government, which was elected in August 2022.

More than $4 million in payment was paid to qualifying frontline workers within agencies in the Customs and Excise Department, Ministry of National Security, St. Christopher Air and Sea Ports Authority, Ministry of Tourism and St. Kitts Tourism Authority, SKNIS and ZBC staff, and the Ministry of Health.

“I would be the first to admit that you can never give enough money to anybody who would have put their life on the line but … this is a gesture to say we value you and we appreciate you,” Prime Minister Drew stated during Thursday’s (October 27, 2022) Sitting of the National Assembly.

During the debate, Member of Parliament for Nevis #11, the Honourable Alexis Jeffers, applauded the Government for its decision.

“Just recently some monies or honorarium were paid to those on the frontline, which is commendable,” he said, adding that the Nevis Island Administration is likely to follow the lead set by the honourable Prime Minister.

During Thursday’s National Assembly Sitting, the COVID-19 Prevention and Control Act was repealed, officially rolling back restrictive measures put in place to combat the spread of the COVID-19 virus. The Act came into effect in January 2021.