Home / Regional / Holness: We have learnt our lesson

Holness: We have learnt our lesson 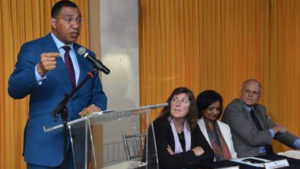 PRIME Minister Andrew Holness says Jamaica has achieved a level of fiscal discipline which is being transitioned into a higher level of responsibility.

The briefing marked the end of the final review mission for the Precautionary Stand-By Arrangement (SBA) with the IMF, which ends in November after being instituted under the current Administration in 2016.

The IMF team yesterday congratulated Jamaica for the successful completion of the economic reform programme, supported by the Stand-By Arrangement, as well as the Extended Fund Facility (EFF) under the previous Government.

The fund noted that the Government’s exemplary programme implementation has resulted in “a stronger economy with significant reduction in vulnerabilities, and increased job creation”.

There was a special message yesterday from the IMF’s former managing director, Christine Lagarde, who left the Fund a week ago to take over as president of the European Central Bank.

Lagarde congratulated Jamaica on six-and-a-half years of relationship with the IMF, and the success of the country’s partnership with the fund over the last decade.

Holness, meanwhile, assured that even after the success of the two agreements, the work still continues and that there is a lot left to be done.

“The real test, after the IMF is out of the room, in some ways, is whether or not we can maintain and carry through the discipline that we have committed to, and successfully committed to over the last 10 years,” he stated.

“My answer is that, yes, we can and we will, because over the last 10 years of IMF programmes, I believe that the culture of fiscal responsibility has become institutionalised in the Ministry of Finance and through the Government,” he said.

“So, fiscal responsibility is now both a culture and a practice of the public service and of the political class, and once we have gotten that, I am of the view that Jamaica’s fiscal future is certain,” he added.

He said that he felt a sense of accomplishment, and had no doubt that the nation should be proud that it is now seeing the benefits of years of sacrifice, although there is still much work to be done.

Other speakers included Louise Levenion, member of the IMF executive board, and Alejandro Werner, IMF director for the Western Hemisphere.

A statement from the IMF staff team and the Jamaican authorities agreed on the steps needed to complete the sixth and final review under the SBA, as Jamaica prepares to exit from IMF financial support.

Consideration by the IMF’s executive board of the review is tentatively scheduled for November 2019. Upon approval, an additional SDR $160.8 million (about US$220 million) will be made available for Jamaica, bringing the total accessible credit to about US$1.63 billion.

The Jamaican authorities continue to view the SBA as precautionary. The SBA will expire on November 8, 2019.