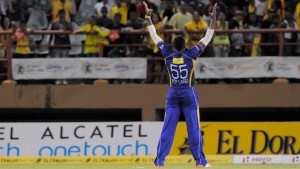 Barbados Tridents captain Kieron Pollard inspired his team to a 14-run win against Guyana Amazon Warriors with 4 for 30 to keep the team on top of the table in their last league match, in Guyana.

Pollard defended 24 runs off the last over as Tridents defended a modest total of 125 by restricting Amazon Warriors to 111 for 6. Tridents, already in the playoffs, will now not make it straight to the final only if Trinidad & Tobago Red Steel lose one of their remaining two matches.

Amazon Warriors are on second spot, but with the same points as Red Steel, Jamaica Tallawahs and St Lucia Zouks.

Amazon Warriors started steady in their chase with an opening stand of 43 between Lendl Simmons and Brad Hodge before both fell within a space of six balls. Simmons scored a 31-ball 15.

Umar Akmal and Denesh Ramdin also could not up the ante with their stand of 28 in 4.4 overs. When Pollard got rid of Akmal in the 15th over, Warriors still needed 53 runs from 31 balls with seven wickets in hand. But Ravi Rampaul gave only 14 runs in his next two overs to make it a more challenging equation of 37 from last two overs.

Christopher Barnwell hit two consecutive fours in the penultimate over, which went for 13 runs, and started the last over with a six but Pollard finished his innings of 24 off 13 and took another wicket to finish with his fourth four-for in T20s, conceding nine runs in the last over.

Tridents had opted to bat but could not get substantial partnerships going early on, thanks to David Wiese’s five-for, his third in T20s. He removed the openers, Dwayne Smith and Steven Taylor, in the fifth over, and was on a hat-trick when he had Jonathan Carter caught behind on the first ball of his next over.

Leg spinner Devendra Bishoo dented them further by getting rid of Robin Peterson and Misbah-ul-Haq within three deliveries, and Pollard was bowled in the next over for 2, to leave the score on 65 for 6 after 13 overs.

Jason Holder and Rayad Emrit then hauled them past 100 with a 45-run partnership in under six overs. Holder smashed two fours and as many sixes in his 17-ball 30, while Emrit scored a run-a-ball 21 to help them finish on a competitive 125 for 9. Sunil Narine finished with 4-1-14-0. (ESPNCricInfo)