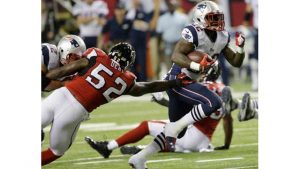 HOUSTON — In the most exciting fourth-quarter rally in Super Bowl history, the New England Patriots showed their remarkable resolve to do something no team has ever done before in coming back from a 28-3 deficit.

In rising up in such fashion to win 34-28 in overtime, charging back from 19 points down in the fourth quarter, quarterback Tom Brady wrote the most dramatic chapter in his future Hall of Fame career, earning MVP honors to set up a highly anticipated Monday morning MVP news conference with NFL commissioner Roger Goodell.

“He’s the Michael Jordan of football,” added safety Duron Harmon, whose inspirational words at halftime — in which he told teammates they were going to pull off the most dramatic comeback in Super Bowl history — were cited by many after the game. “Two Super Bowls, down multiple scores, and he has got the job done.”

This was a script that not even Hollywood could have come up with for believability, especially when considering the greatest Super Bowl comeback had previously been 10 points.

“That’s the best catch I’ve ever seen in person. That’s why they call him Julian Incredible-man,” marveled Hightower.

As for his strip sack, Hightower said, “It’s not a complicated blitz, just blitzing outside, and they had run the play once or twice the previous series. I guess [Devonta] Freeman didn’t see me outside and went to chip or release, and lost sight of me. I see Matt Ryan with the ball in his hands and I wanted it, so I went and took it.”

In the end, Brady took center stage as he won his record fifth Super Bowl in a game he dedicated to his mother, Galynn, who has been battling an undisclosed illness.

“We all brought each other back,” Brady said on the Fox telecast after the game. “We never felt out of it. It was a tough battle. They have a great team. I give them a lot of credit. We just made a few more plays than them.”

You could point to two mottos that stuck with the Patriots this season: Through the playoffs it was “One More,” and throughout the season was the common refrain of “Do Your Job.”

No season had a feel of the Patriots’ motto of “Do Your Job” more than this season in which the team managed to prevail after obstacles from Brady’s suspension to losing star tight end Rob Gronkowski to injury. What has stood out along the way is the stronger-than-the-norm emotion from Brady (“Let’s gooooooo!!!!” he would often scream before games), with Brady embracing the Super Bowl moment as much as ever before.

Now that they’ve achieved their goals and won Super Bowl LI, here’s the bottom line: This one means more.

As owner Robert Kraft said in the days leading up to Super Bowl LI, Deflategate penalties levied by the NFL against Brady and the team had a deeply rooted impact on the 2016 Patriots. Brady was hit with a four-game suspension for the January 2015 incident that months of court battles couldn’t overturn. Meanwhile, the Patriots were fined $1 million and docked a first-round pick in 2016 and a fourth-round pick in 2017.

“I think in a way,” Kraft had said last week, “that galvanized our whole team.”

All the way to a record fifth Super Bowl championship, with no more talk of underinflated footballs.

The 2016 season began with questions of how big of a hole the Patriots would have to dig out of playing without the suspended Brady. While oddsmakers still gave the Patriots 6-1 odds to earn a Super Bowl berth this season, that doesn’t guarantee wins.

The Patriots may have begun the season without Brady, but they did have Belichick. He created a game plan that in conjunction with offensive coordinator Josh McDaniels allowed backup quarterbacks Jimmy Garoppolo and Jacoby Brissett, a rookie, to do enough to help the Patriots win their first three games.

There the Patriots stood, 3-0 without Brady, and they didn’t have Gronkowski in two of those games because of a hamstring injury.

By the time Brady returned on Oct. 9 in Cleveland, it felt like a home game, many fans taking advantage of Columbus Day weekend to make the trip to be there for that moment when Brady first took the field.

It had a Super Bowl-like feel to it, and what manifested itself the rest of the season was a region showering Brady with its appreciation and love on a daily basis. While Brady had his offensive line protecting him on the field, New England fans, as passionate as ever, were protective of his legacy.

Random chants of “Brady! Brady! Brady!” broke out at games. His homecoming trip to San Francisco in late November provided a springboard for more reflection on his career.

By the midway point, the Patriots were 7-1, the Buffalo Bills accounting for their only loss in Week 4 (Brissett’s final start). When Brady returned, he was protected by a healthy offensive line under the tutelage of veteran offensive line coach Dante Scarnecchia, who returned from a pseudo retirement to lead the group.

The line not only helped Brady but created options for running backs LeGarrette Blount and Dion Lewis as the team’s average of 117 rushing yards per game ranked seventh in the regular season after finishing 30th last season.

The Patriots needed other elements of their attack to be reliable, especially once Gronkowski was lost for the season due to a back injury he suffered against the Seattle Seahawks on Nov. 13.

The addition of veteran tight end Martellus Bennett via trade from the Chicago Bears last March meant the Patriots had another option when Gronkowski was placed on injured reserve. Bennett was the team’s third-leading receiver with 55 catches, 701 yards and seven touchdowns.

The unit ultimately finished the season ranked first in the NFL for fewest points allowed per game (15.6 average), although some critics still asked, “Have they truly played any top quarterbacks/offenses?”

It all ended up coming together for the Patriots, and Brady steered the direction. Once the Patriots arrived in Houston, the emotion of the season seemed to bubble over for Brady. During media night, his first night in Houston, Brady was nearly brought to tears in his meeting with reporters at the Super Bowl when a 7-year-old had asked him which person was his hero.

It was his dad, but Brady couldn’t explain why. His eyes welled up, his voice cracked. That type of raw, poignant emotion has never been seen before from Brady in that setting, and it was quickly discovered why that was the case.

His mother, Galynn, has been dealing with an undisclosed illness, and it’s put a strain on the tight-knit Brady family. So if there was a picture that captured the essence of Brady’s emotions leading into Super Bowl LI, it was this.

The emotions peaked even higher as the confetti fell at NRG Stadium on Sunday night.

“It’s going to be a great celebration tonight,” Brady said from the stage. “Thank-you to all of our fans. Everyone back in Boston, New England, we love you. You’ve been with us all year. We’re bringing this sucker home!”