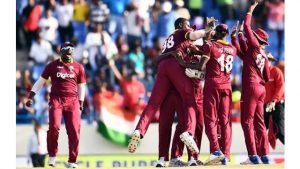 Without a Test win on Indian soil in 24 years and a series victories in nearly four decades, underdogs West Indies find themselves up against the hurdle of history as much as the might of the world’s number one team in the opening Test which was scheduled to bowl off here last night (Jamaica time).

West Indies’ last victory on the subcontinent came when Courtney Walsh’s side won handsomely in Mohali in 1994. Notably, current Test captain Jason Holder was not even born.

Their last series win was under the legendary Clive Lloyd in 1983 when a star-studded unit beat the Indians 3-0 in a six-Test series. That victory, coming on the heels of a home triumph against the Indians just months earlier, helped cement the Caribbean side as one of the greatest ever.

Thirty-five years on, things could not be more contrasting. West Indies are ranked number eight in the world, only above Bangladesh and Zimbabwe, and also have not beaten India in a Test anywhere in 16 years.

Their last trip here in 2013 was a disaster, losing both Tests inside three days. The only survivors from that series are opener Kieran Powell and speedster Shannon Gabriel.

It means the Windies will field a largely inexperienced side against Virat Kohli’s juggernaut but Holder said the squad was one not easily intimidated and could be depended on to show courage and fight.

“It’s obviously a great challenge [facing India]. Everybody in our camp is up for it,” Holder told a media conference here.

“This group has shown what they can do and it’s not a matter of us trying to come here to prove anybody wrong or get involved in a lot of peripheral stuff that is unnecessary in my opinion.

“We’ve come here for one particular reason and that’s to play good cricket. That’s what we need to control – that’s all we can control – and that’s what I want the guys to focus on playing.”

Amidst their gloomy results, West Indies have had some bright sparks, beating Pakistan at home and England away last year.

However, whatever progress was achieved there seemed to unravel in two-Test thrashing at the hands of New Zealand last December when neither match went the distance.

The tourists have won just seven of their last 22 Tests and Holder said even though results were important, improving team processes were equally critical to outcomes.

“I try not to stress too much or think too much about the result. We just try to zone in on the process,” Holder explained.

West Indies have had a bumpy build-up to the series, losing fast bowler Alzarri Joseph to fitness concerns and experienced new-ball seamer Kemar Roach to a family bereavement.

In contrast, India will be at full strength, with captain Virat Kohli leading a unit that includes KH Rahul, Cheteshwar Pujara and seamer Mohammed Shami.

Holder said regardless of which team India put out, patience would be the key to any Windies success.

“Regardless of whoever plays for India now, we’ve got to focus on what we need to do,” Holder stressed.

“I don’t want to sit here and single out players. It’s a long cricket game – five days of cricket is a long time – so it’s a matter for us to be patient. I think patience will play massive key down here in India and just stick to our game plans.

“I don’t really want to get into the one-on-one battles. I just want to play as a collective group and we look forward to the challenge.”