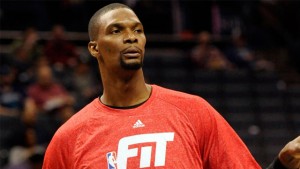 MIAMI — Chris Bosh still has no idea how he was able to play through the pain for so long, or why he wasn’t scared to learn that his health was in serious trouble.

All he knows is that the worst is over.

And right now, that’s all that matters. Bosh was back around the Miami Heat Monday night for the first time in nearly a month, another step on his road to recovery and back to the NBA after being diagnosed with blood clots on a lung. Bosh could be cleared to start regularly exercising later this month, and is scheduled to resume “full basketball activities” in September.

“All the love and energy has really, really allowed me to be back here,” Bosh said. “Not under the circumstances I want to be, but beggars can’t be choosers. Very happy to be here and I’m doing a lot better.”

Bosh has no way of really knowing, but figures he played with the clot on his lung — a dangerous situation, to say the least.

“I’m imagining I did, yeah,” Bosh said. “Some days were rough. Some weren’t. … I just wanted to play ball.”

Bosh spoke for about seven minutes in a pregame news conference, looking normal. He’s not, though: His physical exertion is very limited right now, and he just recently started driving around the block.

“Do a little bit of walking every day, just trying to get better,” Bosh said. “Just take time to reflect, sit outside and enjoy this beautiful weather and appreciate it.”

It was a busy Monday for Bosh. Earlier, 35 Heat employees arrived via bus at his house and surprised him by dropping off 10,000 get-well cards. Bosh was in the driveway, basking in the sun and beaming as he held one of the many overstuffed boxes.

Bosh said there were discussions weeks ago about whether he would ever be able to play again, but that those conversations quickly ended.

“I knew I was going to play basketball again,” Bosh said.

He was on the court Monday, meeting a soldier who was being honored pregame by the Heat and then briefly addressing the crowd.

“I want to thank each and every one of you for all the love,” he said, urging fans to support Miami’s push toward a playoff spot. Bosh lined up alongside his teammates for the national anthem. He then took a spot on the bench for the game, encouraging and chatting with teammates and coaches.

His last game with the Heat was Feb. 11, just before the start of the All-Star break. Bosh was dealing with pain in his side and back for some time (even seeking help from a chiropractor at one point), but went to All-Star weekend in New York anyway — teaming with Dominique Wilkins and Swin Cash to win the Shooting Stars competition at the league’s midseason showcase for the third straight year.

He then went on vacation to Haiti for a few days. The pain intensified and eventually Bosh went to the hospital to get checked out.

Then came the news that scared so many, especially since the same issue — blood clots finding their way to a lung — caused former NBA player Jerome Kersey to die that same week.

After about a week in the hospital, Bosh went home and has been trying to remain patient since.

“He sends me texts during the game, things like `Shoot the ball, 3′” Heat guard Dwyane Wade said. “He knows I don’t see them until after. But it makes him feel better.”

Wade and his wife, actress Gabrielle Union, visited with Bosh and his wife, Adrienne, after Saturday’s Heat win over Sacramento game, catching up over red wine and conversation. Adrienne Bosh was the one who talked her husband into finally going to the hospital.

“She saves my life on a daily basis,” Bosh said.

Wade said Bosh has been inspiring even in his absence.

The Heat are a banged-up team right now, with about half the roster dealing with legitimate injuries. Wade’s one of them, and when his sore hip has acted up in recent days, he said he’s talked his way through it in part by reminding himself that Bosh is going through something much more serious.

“We’ve talked about how blessed and how fortunate, how privileged we are, to be involved in this game,” Heat coach Erik Spoelstra said. “For the guys who are able to compete out there, even if you don’t feel 100 percent, it’s an incredible honor.

“And CB would do just about anything to be out there right now.”

Bosh was all smiles Monday. He met Goran Dragic, the point guard who was acquired last month at virtually the same moment the team was learning that Bosh would miss the season, for the first time. He got to see Michael Beasley for the first time in a while.

He was one of the guys again.

“I’ve come to appreciate everything about basketball, just being in the grind of doing this special job that we have,” Bosh said. “It’s something that I love, will love forever.”