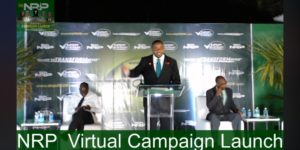 Bjorn Hamley, candidate-select of the Nevis Reformation Party to represent Nevis 10 at his candidacy launch on May 22, 2020

Bjorn Hanley has been announced as the Nevis Reformation Party’s (NRP) candidate to rival Hon. Eric Evelyn at the polls in Nevis 10, next Friday (May 22nd).

Hanley – the son of former politician Nurse Patricia ‘Patsy’ Hanley, who contested local elections in 2011 – outlined some plans of his aimed at improving the geographical space of the constituency while providing jobs. Hanley pledged to light up Gingerland within 60 days of taking office, if elected.

The  declaration of his candidacy comes as a surprise to some person, as Hanley and the NRP shared disagreements publicly. In October 2019, Dr. Kelvin Daly, now interim leader, announced on radio that he was not a representative of the NRP. Hanley was elected second Vice President of the party at a 2018 convention, and was then ousted from the party unbeknownst to him after two voting sessions were held on different occasions of a Nevis 10 caucus.

Radio appearances were made without Hanley – who said at that time as though he felt like an independent candidate, as he was left to campaign alone, which led to his removal from the executive arm of the party.