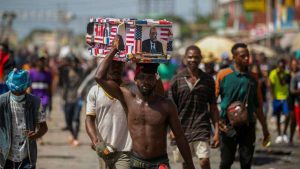 BRIDGETOWN, Barbados (CMC) — A group of international personalities including heads of State says the global community has a responsibility towards Haiti even as it questioned whether foreign military intervention would assist in turning around the situation in the French-speaking Caribbean Community country.

But the group, which includes present and past leaders of several African countries, acknowledged that it would not be an “easy conversation” to deal with the political and socio-economic situation in Haiti, where efforts are being made to overthrow the Government of Prime Minister Dr Ariel Henry and criminal gangs roaming the country freely engaging in criminal activities such as kidnapping for ransom.

“We issue this urgent appeal: let us act now, with a new and genuine benevolence, whatever the risks, and without individual geopolitical intentions. Haitian populations are in danger. History will not be kind to those who remain inactive or who choose to look elsewhere,” said the 31-member group in a statement at the end of a forum.

The forum was initiated by Adama Dieng, a former United Nations under-secretary general and a special adviser for the Prevention of Genocide and Registrar of the International Criminal Tribunal for Rwanda.

The other members of the grouping include president of the African Union and President of Senegal Macky Sall; president of the Democratic Republic of Timor-Leste and co-recipient of the Nobel Peace Prize in 1996, José Ramos-Horta; and Bacre Waly Ndiaye, former member of the Truth and Justice Commission in Haiti.

In a lengthy statement, the group noted that Haiti, a land immersed in African traditions, the “Pearl of the Antilles” or “Mountain Country” in the Taino language, is the nation where black slaves have shown the greatest resilience.

But it noted that on January 1, 2023, the first black republic, which celebrated the 219th anniversary of “its glorious independence…is dying”.

The group said while tragedies, like the 2010 earthquake, certainly killed and maimed many people, destroying infrastructure, “these dramas have not shaken the soul of this astonishing and endearing country”.

“Like the intrepid Haitian woman, Haiti remains surprisingly upright, and its culture vibrant,” the group said, noting that the international community, sub-regional and regional organisations, academics, media, communicators, the private sector, the Haitian comprador bourgeoisie “all have a responsibility towards Haiti.

“It’s not an easy conversation. Migration issues are a hot topic in most Western countries. In September 2021, images of American guards on horseback armed with whips pushing back Haitian migrants at the border with Mexico caused a stir around the world.

“But these whiplashes from the time of the slave trade cannot rewrite the heroic history that Haitians wrote with their blood, sweat, tears and courage. Haiti is the only slave-led military uprising that was able to overthrow a slave-holding colonial power.

“The international community was called upon to step in and fight the gangs. Just as the corrugated iron walls of Haiti’s slums will not stop stray bullets, our physical estrangement from Haiti will not prevent tragedy from piercing our souls and our comfort zones”

The group of international personalities said that in light of past failures, “one can honestly wonder if foreign military intervention in Haiti would provide a lasting solution.

“Either way, inertia is not an option. Any response must revisit history and learn from it, prioritise security, actively promote and support justice while helping to build trust and good governance. The situation must be addressed as a whole, without delay.”

The group said what the international community will or will not do is of crucial importance. “Nevertheless, we support Haitian citizens who want an end to anarchy and violence, who want justice. To measure the strength and value of a family, one must observe the solidarity with which it protects the most vulnerable of its members. The first black republic, perhaps the most fragile of the family of Nations, lacks food, drinking water, fuel, peace, justice.

“We issue this urgent appeal: let us act now, with a new and genuine benevolence, whatever the risks, and without individual geopolitical intentions. Haitian populations are in danger. History will not be kind to those who remain inactive or who choose to look elsewhere,” the group warned.

It said it would be non-assistance to a people in danger and that it is difficult to envisage the resolution of this “Gordian knot without external intervention.

“The Haitian people will only be able to vote and freely choose their leaders if there is security. A member of the family of nations is held hostage by the contours of historical injustices, recurring bad governance and the brutality of armed gangs: the whole family must step in to free this member of the hostage takers as well as the contingencies of previous failures. Haitians would fly with their wings towards the heights of human development, we sincerely hope so.

“Sitting idly by is not an option. So let’s gather our forces for success in Haiti, and as Césaire predicted, there will be room for everyone at the rendezvous of victory. Otherwise, we will all be guilty of not having helped this heroic people in danger,” the group said, adding “we stand with the Haitians. Let’s act now. For Haiti, for humanity”.