Home / Regional / Haiti elections could be pushed back as far as October; UN concerned

Haiti elections could be pushed back as far as October; UN concerned 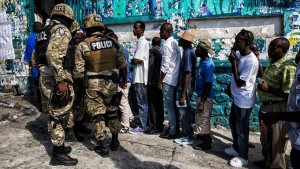 HAITIANS VOTED IN THE SECOND ROUND OF THE SENATORIAL AND PARLIAMENTARY ELECTIONS AND THE FIRST ROUND FOR THEIR NEW PRESIDENT IN OCTOBER 2015.

With the April 24 target for the second round of presidential elections in Haiti missed, interim president Jocelerme Privert says the electorate will probably have to wait until October to cast their votes.

He made the disclosure to reporters on Sunday – the day elections should have been held under a political agreement reached in February, just before Michel Martelly left office without a new president in place.

Privert said the second round of elections which has already been postponed three times, will likely be staged the same time as the Senate elections on October 30.

But the delay has triggered protests by supporters of the front-runner in the presidential elections, Jovenel Moise. He is set to go up against Jude Celestin when the vote is eventually held.

United Nations Secretary-General Ban Ki-moon says he is deeply concerned that the agreed election date was not met and that no alternate electoral calendar was announced.

A statement issued by his spokesperson, yesterday, said: “The Secretary-General reiterates his strong support for the completion, without further delay, of the 2015 elections and calls on all Haitian actors to ensure the prompt return to constitutional order, as the country can ill afford a period of prolonged transitional governance while facing major socio-economic and humanitarian challenges.”

Noting the intended establishment of a commission to evaluate and verify the elections held in 2015, Ban in his statement stressed the need to conclude the process with urgency.

“The Secretary-General reaffirms the commitment of the United Nations to extend its full support to the Haitian people in the fulfillment of their democratic aspirations,” the statement concluded.

The political agreement signed on February 5, 2016 between the main political actors in the country, set out a road map for the rapid conclusion of the electoral process that was initiated on August 9, 2015. A new president was supposed to have been sworn in by May 14.

However, there were allegations of fraud in the first round of voting, which triggered violent protests.