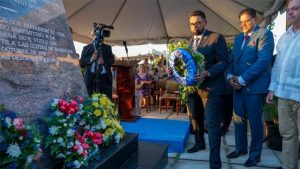 Guyana is continuing its push for the victims of the 1976 Cubana Airways bombing to receive justice.

President Dr Mohammed Irfaan Ali declared on Wednesday during a memorial ceremony in Barbados that Guyana would never bow to terrorists and despite the passage of time, justice needs to be served.

“The passage of time has not quelled our demand for justice for the innocent victims of the Cubana Airways disaster nor will it absolve the intellectual authors of this crime,” Ali stated.

Guyana’s Department of Information reported that Ali said the attack, which was organised by persons with links to the US Central Intelligence Agency, was an attack on the independence of the English-speaking countries.

Cubana Airways Flight CU-455 was scheduled to fly from Guyana to Trinidad, Trinidad to Barbados, Barbados to Jamaica, and finally, Kinston to Cuba. Nine minutes after it took off from Barbados Seawell International Airport (now Grantley Adams Airport), two bombs exploded in the plane, causing it to crash into the Atlantic Ocean.