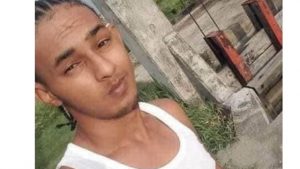 Police officers in Guyana are investigating the ‘alleged murder’ of Sabutaro Singh, 23, also known as Mark, a carpenter and part-time vendor.

Singh was fatally stabbed in the neck on Regent Street around 6 pm on Wednesday.

Investigations revealed that Singh was selling kitchen utensils and other items in the company of two other males when the suspect approached the victim armed with a knife and dealt him a stab to the right side of his neck.

Singh immediately fell to the ground, helpless while the suspect fled on foot west on Regent Street and made good his escape with the knife in his hand.

The victim was pronounced dead at the scene by an EMT doctor from the GPHC.

The Guyana Police Force stated that Singh was previously charged with others for simple larceny with respect to the multi-million-dollar gold heist which occurred at Mahaica between July 2021 and September 2022.

That matter was heard at the Mahaica Magistrate’s Court and the victim was placed on bail while the matter is pending at the said court.

On November 19, 2022, the now-deceased man was at his home, when he was shot by an unidentifiable male and investigations for that matter were ongoing.