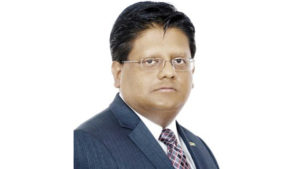 For the period April 28, 2020 to January 27, 2022, Guyana received US$81 million in royalty payments, scraped from the two percent deal it signed with US oil major, ExxonMobil, back in 2016.
When converted to local currency, this amounted to just over $16 billion.
This was revealed on Tuesday when the report, dated April 25, 2022, was laid in the National Assembly, during the 47th Sitting at the Arthur Chung Conference Centre, Liliendaal, Greater Georgetown.

The report, extracted from the Official Gazette, sought to give a detailed financial breakdown of the revenue Guyana received from its oil resources. It also included the payments of profit oil for the period March 11, 2020 to February 28, 2022.
After calculating the figures for the royalty payment for the two-year period, it is understood that the country barely raked in US$81,005,416.74 or GYD$16,889,629,391. This is the state of affairs while Guyana gave away billions in taxes to ExxonMobil for one year alone.
For instance, Kaieteur News reported that between 2019 and 2020 alone, Guyana granted US$657 million or GYD$137 billion in tax exemptions to Exxon. The Auditor General, Deodat Sharma highlighted in his 2020 report that this excessive amount represented a whopping 62.75 percent of total collections by the Guyana Revenue Authority (GRA).
This means that the $137B forgone by government through tax exemptions for that period, amounts to 62.75 percent of what was actually collected by the revenue authority. The 2021 report by the AG has not yet been laid in Parliament, so information regarding recent tax exemptions is not available.
Nevertheless, in light of the foregoing, the Commissioner General of the authority, Godfrey Statia predicted that unless policy changes are made in the oil sector, the tax exemptions to the company will only continue to climb.
He cautioned, “significant increase in exemptions is expected in the coming years owing to the burgeoning Oil and Gas Sector, and unless policy changes are effected, exemptions are expected to grow exponentially as the industry develops and matures, and in particular, if the Production Sharing Agreements (PSAs) for other blocks have similar provisions for exemptions.”
Statia, in the report, was keen to note that the award of tax exemptions is not under the control of that agency.
He said, the tax exemption regime is a matter of policy, and therefore only administered by the authority.
In fact, the Commissioner General reiterated that he is on record, as stating his preference for the removal of the concession regime and having it replaced with a system of tax credits, as practised in the developed nations, thereby allowing for improved compliance with the tax laws and the terms of Investment Development Agreements (IDAs).
A private citizen has since moved to the local Court, to challenge the “oppressive” tax concessions being extended to the multi-billion dollar firm. The legal proceeding was filed by Kaieteur News Publisher, Glenn Lall, through his Attorney-at-Law, Mohamed R. Ali on January 13, 2022.
Lall is arguing that many of the provisions listed under Article 15.1 of the Petroleum Agreement, dated June 27, 2016 between the Guyana Government and the oil companies, grants exemptions to persons other than licensees, which violate the Petroleum Exploration and Production Act, the Financial Administration (and Audit) Act, the Prevention of Discrimination Act, and the Constitution. Lall through his lawyer, therefore contends that the provisions are unlawful, null and void, and of no legal effect.
The matter which ExxonMobil subsidiary, Esso Exploration and Production Guyana Limited (EEPGL), joined as a respondent is set for continuation before Justice Nareshwar Harnanan at the High Court in Georgetown on August 12, 2022.
As such, Lall’s Attorney is expected to file submissions in response to the defence brought by the Government and EEPGL on or before June 3 while the respondents, Government of Guyana and EEPGL are expected to file their answers by July 1, 2022.
All final written arguments are scheduled to be filed by July 29 and August 12, 2022 is set for oral arguments.
On August 12, attorneys from all sides will be given at least 20 minutes to present their case before the court, after which the Court is expected to rule on September 9, 2022.