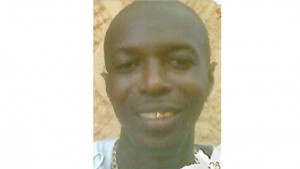 Up to late last night doctors at the Georgetown Hospital were battling to save the life of a mini bus driver who was shot at point blank range in the face by a lone gunman in what appears to be an execution attempt.

Devon Searles of 73 Hadfield Street received a single gunshot to his left side jaw when the gunman who was sitting behind him in the route 40 mini bus he was driving pointed a .38 revolver at his head and pulled the trigger.

Clutching his jaw, Searles hurriedly exited the bus and ran several meters away to avoid being shot again.

The bus had stopped near the David and Sherriff Street junction to put off a passenger when the gunman made his move around 18:40 hours.

The gunman made no attempt to shoot or rob the conductor of the bus although he was sitting next to him and pointed the gun in his direction after shooting the driver.

With the gun pointing to his head, the conductor bolted from the vehicle, leaving behind eight horrified passengers and some shocked onlookers.

Speaking to this newspaper, the bus conductor, who did not wish to give his name, recalled that the gunman had joined the bus from the Kitty bus park at the Stabroek Market.

According to the conductor, the man sat next to him and rode the bus for the entire round trip from the market to Kitty and back, without he nor the driver thinking anything was amiss.

“I turn and ask he ‘whappen, you ain’t paying me?’ He give me $120 and say he going up back again,” the conductor said.
Even then, Searles nor his conductor suspected anything, since none of them recognized the gunman.

When the bus neared the stop light at the David and Sherriff Street corner, a passenger requested to be let off.

“When I buss de door and de passengers come out now, all I hear is, pow! When I turn now, I see de gun in front ah me face and I run,” the bus conductor said.

By the time, the wounded Searles also ran out of the bus.

“When I run around at de back of de bus, I see de driver jump out same time, me and he cross-cross. But me ain’t know whey he run,” the conductor said.

At the time he was not too sure who the gunman’s target was, since out of fear for his life he bolted and did not look back.
“While he running I see he (driver) holding he jaw and I suspect that he get knock. Is when I come back to de bus now and I call I hear he deh at de hospital bleeding bad.”

He could not say if the driver and the assailant had any previous altercation, since according to him, he only started working with Searles yesterday afternoon.

It is not clear if the shooting had anything to do with Searles’ previous brush with the law. The 32 year old Searles was charged in December 2013 for his alleged involved in the theft of two cars the previous month.

Back then, it was alleged that on November 15 at Lusignan, East Coast Demerara, he robbed Sanjay Babulall of two motorcars, an Allion and a Primo, together valued $6.3 million, property of Robena Khan.

The Police prosecutor had told the court that on the day in question, two men robbed Babulall of two motorcars at Selena’s Auto sales at Lusignan and during the robbery they made use of personal violence against the victim.

The prosecutor stated that the Allion was recovered at Lusignan, and acting on information received, the police arrested Searles, who admitted to taking the Primo to a mechanic.

However, Searles’ attorney told the court that at the time of the robbery, her client was working on a minibus and had eyewitnesses to prove such.

Searles was remanded to prison but was subsequently granted bail.

It is not clear what was the outcome of that matter which was being heard at the Vigilance Magistrate’s Court.