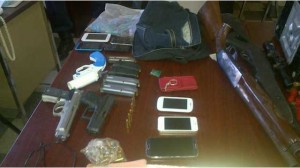 Residents can rest better knowing a police raid at a St Johnston’s Village house helped to keep “enough ammunition and guns to supply a small armory,” off the streets.

Assistant Commissioner of Police, Nuffield Burnette confirmed that a 46 – old man and his 25 – year old girlfriend are now in custody after the search warrant was executed in the wee hours of Saturday seizing five illegal guns, almost 200 rounds of ammunition, along with several other items.

They found five loaded magazines – two for the Beretta each containing 10 rounds and two matching the Glock, each clip had 15 rounds. One magazine did not match the weapons seized in the operation.

“The suspects face charges of possession of ammunition and guns. They could also be charged if they cannot verify ownership of the phones and TV’s because there have been a number of reports of stolen electronics. The licence plate may not be stolen but we believe they could have been used for clandestine purposes,” the assistant commissioner said.