Gully Bop: From Rags to Riches 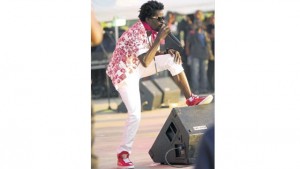 DEEJAY Gully Bop is slated to release his debut EP, Rags to Riches, this month. The seven-track project will feature singles such as his signature Dem no Bad Like Me, Body Specialist and Dream.

“Bop have been having a really busy period but he is still making the time along with the producers to get his EP out. He is hoping to break new ground and markets with this, so a lot of thought is going in as it relates to song selection,” Shauna Chin, Gully Bop’s manager, told the Jamaica Observer.

Rags to Riches has songs produced by Supa Hype, Panta Son and Friends for Real.

Meanwhile, Chin dismissed claims that she was arrested Monday by the police on lottery scamming charges.

The rumour did the rounds on social media. Chin, 25, admitted that she visited the offices of the Major Organised and Anti-Corruption Agency (MOCA) to give a statement against allegations she illegally collected money from a promoter for shows in Canada for Gully Bop.

“Someone had used my name and collected Can$3,000 dollars for five shows for Gully Bop in Canada. I am not a mad woman to be collecting little over $300,000 for all of five shows! I found out about this only when the promoter contacted the Gully BOP page on Facebook,” Chin said.

The promoter reported the matter to MOCA after Chin explained that she did not receive any funds.

Gully Bop is scheduled to perform in St Vincent and Barbados this weekend.