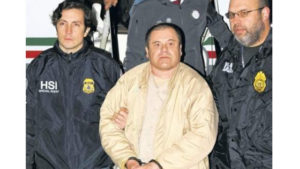 In this January 19, 2017 photo provided by the United States Drug Enforcement Administration, authorities escort Joaquin “El Chapo” Guzman from a plane to a waiting caravan of SUVs at Long Island MacArthur Airport in Ronkonkoma, NY. The notorious Mexican drug lord was convicted of drugtrafficking charges yesterday in federal court in New York

Guzman listened to a drumbeat of guilty verdicts on drug and conspiracy charges that could put the 61-year-old escape artist behind bars for decades, in a maximum-security US prison selected to thwart another one of the breakouts that made him a folk hero in his native country.

A jury whose members’ identities were kept secret as a security measure reached a verdict after deliberating six days in the expansive case. They sorted through what authorities called an “avalanche” of evidence, gathered since the late 1980s, that Guzman and his murderous Sinaloa drug cartel made billions in profits by smuggling tons of cocaine, heroin, meth and marijuana into the US.

As the judge read the verdict, Guzman stared at the jury and his wife watched the scene, both with resignation in their faces. When the jurors were discharged and Guzman stood to leave the courtroom, the couple traded thumbs ups.

US District Judge Brian Cogan lauded the jury’s meticulous attention to detail and the “remarkable” approach it took toward deliberations. Cogan said it made him “very proud to be an American”.

Evidence showed drugs poured into the US through secret tunnels or hidden in tanker trucks, concealed in the undercarriage of passenger cars, and packed in railcars passing through legitimate points of entry — suggesting that a border wall wouldn’t be much of a worry.

The prosecution’s case against Guzman, a roughly 5½-foot figure whose nickname translates to “Shorty”, included the testimony of several turncoats and other witnesses. Among them were Guzman’s former Sinaloa lieutenants, a computer encryption expert, and a Colombian cocaine supplier who underwent extreme plastic surgery to disguise his appearance.