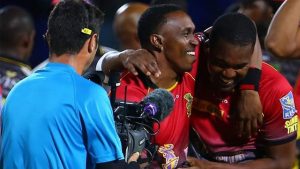 BROTHERS IN ARMS: Darren, right, and Dwayne Bravo of the Trinbago Knight Riders celebrate victory over the St Kitts and Nevis Patriots in the 2017 Hero Caribbean Premier League at Warner Park, Basseterre, St Kitts, on Wednesday.

“It’s a great feeling. To chase down 86 runs in five overs, especially we needed like 54 in 13 balls or something like that.”

Dwayne Bravo was more than a little pleased with the way his Trinbago Knight Riders seemingly defied the odds to beat the St Kitts and Nevis Patriots on Wednesday night and cement their place as the top team in the Hero Caribbean Premier League T20 competition.

In a match between the top two teams at Warner Park in St Kitts which was affected by rain and a power outage, rapid-fire, unbeaten knocks from Brendon McCullum and Darren Bravo’s Man-of-the-Match onslaught upstaged an explosive 93 from Chris Gayle to lead the TKR to an eight-wicket victory under the Duckworth/Lewis/Steyn Method.

McCullum, the former New Zealand captain, was not out on 40 and West Indies left-hander Bravo was not out on 38, as the Knight Riders successfully chased a DLS-revised target of 86 from six overs in a thrilling finish.

In an explosive conclusion, McCullum and Bravo smashed one four and eight sixes, sharing an unbroken 54 off 13 balls for the third wicket to catapult the TKR over the finish line with four balls remaining.

Bravo concluded the showpiece with successive sixes off the first two deliveries of the final over—bowled by Jonathan Carter—to finish the match in grand style and hand the visitors their seventh victory of the competition.

The result meant TKR remained firmly at the top of the standings on 14 points.

The key moment came following the final rain break when the match was reduced to a six-over affair, with the Knight Riders–now set 86 for victory–still needing another 52 off 17 balls. Colin Munro had been bowled by leg-spinner Samuel Badree off the first ball off the fourth over before the final interruption. And upon resumption, Darren Bravo came out to partner McCullum, and take over the game.

“The good thing about it, Samuel Badree had five balls left and I know Darren very well and I think that (over) is what changed the momentum for us in our favour,” skipper Dwayne said afterwards. “I got to say well played to Darren and obviously Brendon McCullum, putting (Mohammad) Nabi under pressure; Nabi is one of their better bowlers also, so I think the pressure got to the Patriots. The ball was wet also, so the momentum was with us.”

Gayle felt his team was in charge, especially after the reduction of overs, but he was still wary of the TKR.

“Watching a lot of T20 games, even when you only have 17 deliveries and you need 50 runs it’s still possible, still gettable and I said that to the guys, the game is not over, these guys still can get it which they did but these things do happen in T20 cricket and we just have to move on from here.”

Earlier, the Patriots skipper had seemed to set up the match for his team, plundering five fours and eight sixes from 47 balls in a typically fiery knock that drove the Patriots to 162 for three from their rain-reduced 13 overs. Fellow left-handed opener Evin Lewis supported with 39 (14 balls) and Shamarh Brooks gathered a run-a-ball 20, as the Patriots defied the light outage and two stoppages for rain to post a competitive total.

“Both Chris and Evin are two of the better players in this format so it’s very hard to contain them, especially on this ground,” captain Bravo said. “At the half-way stage (of the Patriots innings) even though we went back out and Chris was still batting, I said to the guys, ‘let’s back our skills; if he beats us off our plans and skills, then well played’ but there’s not much you could do when someone like Chris is on the go, especially at a venue like this.”

After the target was revised to 169 from 13 overs and in between some early pyrotechnics from McCullum, former Australia fast bowler Ben Hilfenhaus bowled Sunil Narine for five and then Badree got Munro for one to leave the Knight Riders 34 for two in the fourth over.

But a 30-minute stoppage for rain, lopped seven more overs off the innings, leaving TKR with their final, highly improbable, if not impossible target which Bravo, in particular, and McCullum made look like a walk in the park.

“I always tell the team their (Patriots’) weakness is their bowling especially in the later stages of the game,” Dwayne Bravo said. “We bat fairly deep so it doesn’t matter what they get, I always feel we can get the runs whether they score 200 or 190.”

On Wednesday the captain’s faith in his batsmen was justified once again, and TKR will now look to push their winning streak to six when they go to Sabina Park tomorrow to tackle the only team to have beaten them thus far, the Jamaica Tallawahs.