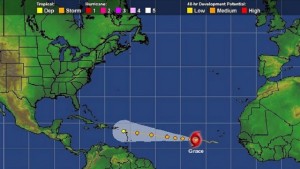 FLORIDA, United States, Monday September 7, 2015 – Tropical Storm Grace is continuing its journey across the Atlantic as most forecast models have it dissipating over the Eastern Caribbean in about five days.

At 5 a.m., the storm was about 685 miles west southwest of the Cape Verde Islands, carrying maximum sustained winds near 50 miles per hour and moving west at about 16 miles per hour.

“Little change in strength is expected during the next day or so, followed by gradual weakening,” the National Hurricane Centre in Miami said.

The National Oceanic and Atmospheric Administration (NOAA) Climate Prediction Centre said last month that there was a 90 per cent chance there would be only one major hurricane even though the June 1 to November season could produce as many as 10 named storms. It was the highest confidence level given by the NOAA since seasonal hurricane outlooks began in 1998.

The centre said there was 70 per cent chance of six to 10 named storms forming, of which one to four would become hurricanes and either none or just one becoming a major hurricane.

So far the season has produced seven named storms, with one of them – Danny – developing into a small hurricane.