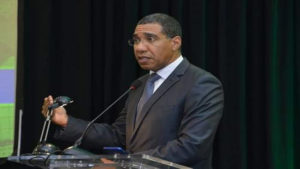 Prime Minister Andrew Holness, says the Government has no intention to sit idly by and watch the country’s iconic tourism brand get tarnished by criminals.

Addressing a function at the Jewel Grande Hotel in Rose Hall, St James, last week, the prime minister said that on a recent trip overseas, he was frequently asked by journalists, “what are we doing about the crime situation?

“Then the second question they asked was, ‘how is the state of emergency affecting tourism?’,” Holness added.

“Two contradictory positions. They want us to address the crime and violence issue, but they are not understanding the need for the use of extraordinary powers to address it,” Holness said.

The prime minister said the Government took careful consideration of what was at stake prior to calling a state of public emergency in the parish of St James, adding that the only criticism was “why it took so long for us to call it”.

“The effect of it in the first three weeks was significant. My assessment of it now is that there is still some effect, but there is recovery,” he noted.

Holness said the Government ensured that in making the call to have a state of public emergency “in our tourist area that our security forces were trained and prepared to be an asset for Jamaica.”

“In other words, there is no one who could report that the behaviour of the security forces had a negative impact on the tourism product. Indeed, our strategic thinking is that, in the long run, when this is assessed… the credit will be given to the security forces and to Jamaica that we were able to use extraordinary powers without abusing citizens or our visitors,” the prime minister said.

Holness said the Government is willing to wager that at the end of “these extraordinary security powers, we would have eroded the three main threats to the St James economy”.

“They are the same three threats to Jamaica – guns, gangs and dons. You would have heard about what happened earlier today (Saturday), in an upscale community, where one of St James’ most wanted was fatally apprehended by the police. The police were very patient and precise as there were no civilian casualties,” he noted.

Holness pointed out that during the standoff, two policemen were injured, but, fortunately, not critically.

He added that the state of public emergency should not be viewed as a public relations exercise. “We are actually using these extraordinary powers to degrade the capacity and to remove the opportunity of the criminals,” he said.

Holness said he wants the criminals to know that they are not reading the situation correctly, adding that the Government has no intention to relent or give up its strategic objectives.