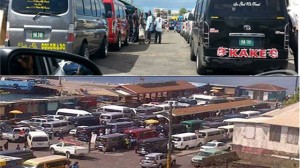 BASSETERRE, ST. KITTS, NOVEMBER 3RD 2014 (CUOPM) – Bus drivers will be granted a number of government concessions for the installation of cameras in their vehicles.

Deputy Prime Minister and Minister of Transport, the Hon. Dr. Earl Asim Martin made the disclosure after discussions with representatives of three bus associations on Monday in the aftermath of the tragic death of bus driver Mr. Kevin Newman on Saturday night.

Dr. Martin said during the meeting which was also attended by officials of the Ministry of Finance, members of the High Command of the Royal St, Christopher and Nevis Police Force and the executives of the St. Peter’s, East and West Bus Associations it was also agreed that lighting will be improved at bus stops and there will be a greater police vehicle and motorcycle presence on the Island Main Road.

It was also agreed that there will be improved lighting on the Gibbons/Dieppe Bay segment of the Island Main Road and the role and impact of the Transport Board will be enhanced.

Deputy Prime Minister Martin said the representatives will meet in one week’s time.

“Heightened cooperation between the public and law enforcement in recent years has resulted in a dramatic drop in crime, and I urge the public to ensure that this cooperation and collaboration continues unabated because this is how law-abiding citizens ensure that safety and security prevails for all,” said Dr. Martin.

Bus drivers protested the death of Newman by withdrawing their services for a few hours during the day.