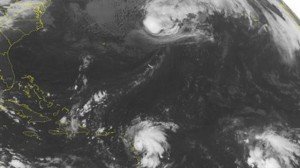 ST JOHN’S (AP) – Tropical Storm Gonzalo swept through the eastern Caribbean on Monday, slowly gaining strength toward potential hurricane status on track to move over the US Virgin Islands and parts of Puerto Rico.

Heavy rain and strong winds buffeted Antigua, where the effects of Gonzalo were expected to be felt for several hours. The government ordered schools and businesses to close amid an island-wide power outage and opened four emergency shelters.

“It is strengthening very slowly,” said Scott Stripling, a meteorologist tracking the storm from the US National Hurricane Center in Miami. “It’s not out of the question that we could see it become a hurricane later this evening or tonight.”

Gonzalo is expected to produce up to 8 inches (20. centimetres) of rain across the Leeward Islands, the U.S. and British Virgin Islands and Puerto Rico.

Stripling said the latest forecast puts it on track to take a north-westerly turn, passing over the Virgin Islands and the Puerto Rican islands of Vieques and Culebra.

Over the weekend, Tropical Storm Fay knocked out power to thousands in Bermuda before moving out over open ocean.