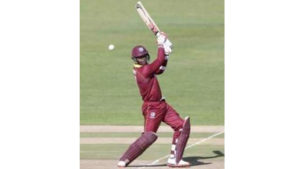 HARARE, Zimbabwe (CMC) — Both Evin Lewis and Marlon Samuels found form in time for the all-important Super Sixes, stroking half-centuries as West Indies beat the Netherlands by 54 runs under Duckworth/Lewis to end the preliminaries of the ICC World Cup qualifiers unbeaten here yesterday.

Short of runs for the tournament, Lewis top-scored with 84 and Samuels, an unbeaten, 73, as West Indies piled up 309 for six in a contest reduced to 48 overs per side at Harare Sports Club.

Rovman Powell followed up his maiden hundred against Ireland with a cameo 52, while veteran opener Chris Gayle struck 46.

Faced with a mountain of a run chase, Ryan ten Doeschate lashed 67 and Wesley Barresi, 64, but Netherlands found themselves on 167 for six and short of the required par score when the rains arrived in the 29th over.

West Indies will now carry four points into the Super Sixes stage where they face a tricky clash with Afghanistan in their opening fixture on Thursday at Harare Sports Club.

Chasing a clean sweep of their preliminary campaign, the Windies were given a strong start by the left-handed pair of Lewis and Gayle, who put on a rollicking 85 off 51 balls for the first wicket, after being sent in.

Lewis faced 92 balls and struck half-dozen fours and four sixes, while Gayle blasted a pair of fours and five sixes in a 31-ball appearance.

Gayle appeared set for his 49th ODI half-century when he mistimed a stroke off seamer Paul van Meekeren (2-37) and holed out to Roelof van der Merwe running around from mid-off.

Lewis then anchored two small partnerships, putting on 38 for the second wicket with Shimron Hetmyer (10) and another 41 for the third with Samuels.

He raised his half-century off 41 balls in the 14th over by depositing 21-year-old seamer Shane Snater over the ropes at square leg but perished to a one-handed stunner by Pieter Seelar at point off pacer Peter Borren (2-55) in the 28th over.

Three wickets fell for 41 runs to leave the Windies on 205 for five in the 36th over but Samuels and Powell posted 99 from 69 deliveries for the sixth wicket to re-energise the innings.

Netherlands, needing to win to stay in the competition, were quickly in trouble when they lost two early wickets to slump to 29 for two in the seventh over.

Scott Edwards fell in the sixth over for one; run out after being sent back by Barresi following a mix up over a single.

And, in the following over, seamer Kemar Roach removed Ben Cooper’s off-stump as the left-hander missed a booming drive for two.

Ten Doeschate and Barresi then revived the Netherlands’ hopes in a 113-run, third wicket stand, which kept the game open.

The 37-year-old ten Doeschate struck four fours and a six off 62 balls, while Barresi faced 77 deliveries and counted eight fours.

However, the partnership was ended in the 24th over when Lewis threw down the stumps at the non-striker’s end running in from deep mid-wicket, and found Barresi short of his ground scrambling to complete a second run.

That wicket was the first of four to tumble for 25 runs in the space of 30 balls, as the Netherlands found themselves way behind on Duckworth/Lewis when the rains arrived.

M Samuels not out 73

C Brathwaite not out 1

Did not bat: A Nurse,

B Cooper b Roach 2

R ten Doeschate not out 67