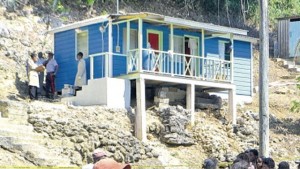 RICHMOND HILL, St James — The St James police say they are following several leads in their investigation of yesterday’s fatal shooting of four people, including an eight-year-old girl.

Police said yesterday that they were seeking Watson’s ex-boyfriend, who allegedly trailed the eight-year-old girl from her Montego Bay school earlier this week to her family home in Richmond Hill. The estranged lovers reportedly had a verbal confrontation in the community that day.

Police reported that between 2:00 am and 2:30 am yesterday residents heard a barrage of gunshots coming from the direction of the house occupied by the four.

Patricia Coley, Scott’s mother, who has made Richmond Hill her home since 2007, said she was shocked when she went to visit her son about 6:30 yesterday morning.

“When I went down there I pushed the door and saw him lying down between the stove and the doorway and when I look over I saw the other three lying near the back door. I shake him and nothing, so I came out back and sit down on the step,” said the distraught woman.

Police theorise that the attackers removed two panes of glass from a window, through which they fired inside the room occupied by the four. Scott, who was reportedly found clutching an ice-pick, is believed to have attempted to defend himself upon realising that the home was being invaded.

Scott’s mother explained that her son, who lived between Waterhouse and Richmond, had rented a section of the home only two months ago.

She revealed that her son recently entered into a common-law relationship with Watson, who moved in to live with him. The eight-year-old girl also lived with them.

According to Coley, Walker was Scott’s friend, who moved from West Kingston to “cool out” with him in the country.

The grieving mother described her son as a loving and kind person who would only react with anger if provoked. “Him have girlfriend problem but otherwise from that him nuh walk and trouble people. Him don’t settle down,” she said.

Meanwhile, Jamaica Labour Party councillor for the Cambridge Division Homer Davis condemned the vicious killing in the usually quiet farming community which has left persons in the community on the edge.

“It’s wicked, it’s heartless, the men are heartless men to have gone into someone’s house at that hour of the morning where, included among the dead, there was an eight-year-old. It is wicked, it is barbaric. It is a crime that I think should wake up the people of Jamaica and say enough is enough,” Davies said.

He also expressed concern about the upsurge of killings in South St James.