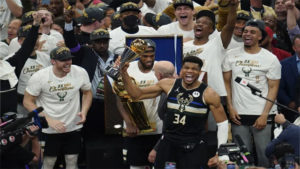 In a historic performance worthy of Kareem Abdul-Jabbar, who last led the Bucks to a title in 1971, Antetokounmpo scored 33 of his 50 points after halftime of Game 6 to beat the Phoenix Suns, 105-98.

Antetokounmpo marked one of the great Finals performances in NBA history with 16-of-25 field goals, 17-of-19 free throws, 14 rebounds and five blocks in 42 minutes. After losing the first two games of the series, Milwaukee won four straight. Antetokounmpo scored 41 points in Game 3, secured Game 4 with an iconic game-saving block, clinched Game 5 with a legendary alley-oop dunk and dropped a 50-spot in Game 6.

Finals MVP recipients do not get more obvious.

“This should make every person, every kid, everybody around the world believe in their dreams,” said Antetokounmpo, a Greek national born to Nigerian parents, drafted 15th overall as a relative unknown in 2013. “No matter whatever you feel, when you feel down, when things look like it might not happen for you, you might not make it — your career might be basketball, it might be anything — just believe in what you’re doing. Keep working. Don’t let nobody tell you what you can’t be and what you cannot do.”

Giannis Antetokounmpo among rare company
The company 26-year-old Antetokounmpo keeps is already few. The two-time regular-season MVP and 2020 Defensive Player of the Year added the award named in Bill Russell’s honor to his growing list of accolades. Until Tuesday, only Michael Jordan had those same four trophies in his case. Antetokounmpo joined Jordan, LeBron James, Jerry West, Elgin Baylor, Rick Barry and Bob Pettit as the only players to score 50 points in a Finals game. Pettit in 1958 was the only other player to do it in a close-out game.

Antetokounmpo survived a condensed regular season and a hyperextended left knee in Game 4 of the Eastern Conference finals to achieve a goal that eluded him in two previous disappointing playoff exits. Those losses elicited the criticism that follows growing legends until they win a ring. Antetokounmpo now joins all-timers like Abdul-Jabbar, Magic Johnson and Tim Duncan as Finals MVPs by the age of 26

“I hope I give people around the world, from Africa, from Europe, give them hope that it can be done. It can be done,” Antetokounmpo added in his postgame interview, clutching the championship and Finals MVP trophies. “Eight and a half years ago, when I came into the league, I didn’t know where my next meal would come from. My mom was selling stuff in the street. And now I’m here, sitting on the top of the top. That’s why I’m extremely blessed. Even if I never have a chance to sit at this table ever again, I’m fine with it.”

The culmination of an extraordinary journey that has had a profound effect on the game’s international popularity, Tuesday’s win was a boon for small-market basketball everywhere. In lieu of entering free agency this summer, Antetokounmpo signed a $228 million supermax extension in Milwaukee prior to the season, pledging to deliver a title to the team that drafted him. He bucked the player movement trend toward superstar pairings and delivered, forging his own path to set a standard for his peers to admire.

The Bucks got just 29 points on 10-of-32 shooting combined from Khris Middleton and Jrue Holiday, but wide-eyed reserve Bobby Portis contributed 16 points, each of Brook Lopez’s 10 points resonated, and Milwaukee’s collective defensive effort was beyond reproach, as it had been throughout these playoffs.

Giannis too much for Suns to overcome
Chris Paul led the Suns with 26 points in defeat. Devin Booker scored 19 points on 22 shots.

“For me, it just means back to work,” said Paul, who at 36 years old made his first Finals appearance in Year 16 of a future Hall of Fame career. “Back to work. Nothing more, nothing less. Ain’t no moral victories or whatnot. We sort of saw what it takes to get there, and hopefully we see what it takes to get past that.”

The first 3:19 of the fourth quarter was played within one possession, until an Antetokounmpo tip-in put the Bucks up 86-82. Paul answered with a quintessential midrange jumper, but Antetokounmpo’s four straight free throws and a Portis layup gave the Bucks a 92-86 lead that put pressure on Phoenix to fold.

The Suns made one final push to close within 100-96 on a Booker layup and two Jae Crowder free throws with 1:14 remaining, but Middleton drilled a 17-foot dagger fading to his right over Booker. All that remained was the embrace of Antetokounmpo and Middleton to celebrate eight seasons working to this moment.

Both teams battled nerves early, combining for three field goals on 15 attempts and six turnovers in the first five minutes. Middleton was first to find his rhythm, scoring seven straight points for a 15-7 cushion. Portis and Antetokounmpo each took turns scoring six straight, pushing the advantage to 29-16 by quarter’s end.

In a sure sign of trouble, Cam Payne’s five points off the bench led the Suns in the first quarter, but he scored another five to ignite a 10-0 run to start the second. It was not unlike the counterpunch the Bucks threw in the second quarter of Game 5 in Phoenix. By the midway point, Paul’s layup tied Game 6 at 33, and a pair of Deandre Ayton free throws gave the Suns their first lead inside of five minutes before halftime.

Sniffing a ring, Antetokounmpo owned the third quarter, scoring 14 of Milwaukee’s first 18 points after the break and dropping 20 total in the stanza. His burst returned the lead to the Bucks, and six straight points from Brook Lopez — including a thunderous dunk that ignited the crowd — extended their edge to 66-61.

A four-point play from Crowder and inspired effort from backup center Frank Kaminsky helped the Suns withstand the onslaught. With Ayton in foul trouble and Paul resting, Booker helmed a 14-9 run to close the third, scoring or assisting on the final 10 points to even the score entering the fourth, 77-77.

But Antetokounmpo would not be denied, adding 13 points in the fourth quarter to get his 50 points for the 50 years since the Bucks last were champions. His latest pledge is not to wait so long for the next one.

“As Coach Bud said, we’ve got to do it again,” Antetokounmpo told the Fiserv Forum crowd afterward.