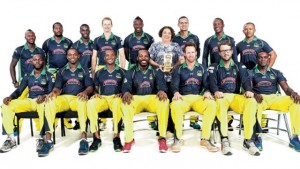 BASSETERRE, St. Kitts (CMC) – Chris Gayle blasted a half century to lead the Jamaica Tallawahs to a convincing seven wicket victory over St Kitts and Nevis Patriots in game nine of the Caribbean Premier League in St Kitts on Tuesday.

Gayle led his troops with an unbeaten top score of 72 to complete a clinical chase with five balls to spare after Tallawahs bowlers restricted the Patriots to 160 for five at Warner Park.

Captain Marlon Samuels and Martin Guptill scored solid half centuries and featured in important partnerships to help Patriots stitch together a decent total.

But Krishmar Santokie led the Tallawahs attack with an outstanding four-wicket haul, including wickets in the final two balls of the innings, which has left him with a chance of completing a hat-trick in his next match.

Tallawahs never looked in danger of losing the chase except for some uncertain moments in the middle overs when Patriots failed to build on some advantages including dropping Gayle on the verge of his half century, the high point of some poor fielding.

Gayle teamed up with Chris Lynn and together they clobbered the bowling including captain Samuels who was expensive in his two overs.

Gayle’s 72, which came off 54 balls, started quietly but transformed gradually into an entertaining knock punctuated with six fours and two sixes.

Patriots blew a chance to remove the prolific Jamaican batsman when he went after Shahid Afridi to bring up his half century but Orlando Peters dropped a regulation catch in the deep.

Lynn also played an entertaining innings during his 85-run partnership for the second wicket with his captain, scoring 52 from 33 balls, counting three fours and four sixes and bringing up his half century on a wave of three consecutive sixes of Samuels.

However, he lost his wicket attempting to cut the first delivery from Carlos Brathwaite and succeeded only in dragging it back onto his stumps.