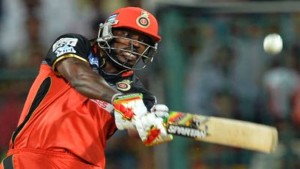 Set 134 for victory, the hosts cruised to their target with 26 balls remaining, with the West Indies left-hander lashing 52 from 39 deliveries.Gayle has now scored 177 runs from five innings in the competition.

Somerset were struggling at 28 for two in the fourth over when Gayle instigated a 67-run, third wicket stand with Sri Lankan star Mahela Jayawardene, who made an unbeaten 45, to see Somerset to victory.

Gayle hammered four fours and three sixes, while the right-handed Jayawardene punched six fours and six off 32 balls. The Jamaican was severe on his West Indies T20 captain, Sammy, smashing him for two boundaries in the tenth over of the innings which went for 11 runs.

He also collared fast bowler Tino Best, blasting the right-arm speedster for a six and a four in the sixth over of the innings that also leaked 11 runs. When Gayle finally departed in the 12th over, bowled by off-spinner Will Smith, Jayawardene put on a further 37 for the fourth wicket with Johann Myburgh (11).

Sammy finished with one for 22 from his two overs of medium pace while Best went wicket-less from three overs which cost 19 runs. Earlier, Hampshire were dismissed for 133 off 18.3 overs after they were sent in, with middle order batsman Liam Dawson top-scoring with 46 from 34 balls.