Gay couple beaten after refusing to kiss on London bus 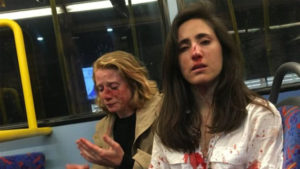 A couple say they were subjected to a homophobic attack and left covered in blood after refusing to kiss on a bus.

Melania Geymonat, 28, said the attack on her and girlfriend Chris happened on the top deck of a London night bus as they were travelling to Camden Town.

A group of young men began harassing them when they discovered the women were a couple, asking them to kiss while making sexual gestures.

Arrests have been made in connection with the attack, the Met said.

Earlier, police said they were “following up” on CCTV footage of the assault. The force has not disclosed how many arrests have been made.

Speaking about the attack, which happened in the early hours of 30 May, Ms Geymonat told BBC Radio 4’s World at One she had previously experienced “a lot of verbal violence”.

But she said she had never before been physically attacked because of her sexuality.

Ms Geymonat said: “They surrounded us and started saying really aggressive stuff, things about sexual positions, lesbians and claiming we could kiss so they could watch us.

“To ease the situation I tried to make some jokes, like Chris wasn’t understanding because she didn’t speak English.

“She even acted as if she was sick… but they started throwing coins. The next thing I know Chris is in the middle of the bus and they are punching her.

“So I immediately went there by impulse and tried to pull her out of there and they started punching me. I was really bleeding.

“The police are extremely good; we are in close touch and they are investigating.”

You may also be interested in:
‘Homophobic school protests must stop’
Lecturer sacked for defacing poster
LGBT grooming claims vicar ‘a fool’
Ms Geymonat added that the gang of at least four men might have broken her nose during the ordeal, and stole a phone and bag from them before fleeing.

Both women were taken to hospital for treatment to facial injuries.

Ms Geymonat said one of the men spoke Spanish and the others had British accents.

Bus operator Metroline said there was CCTV footage of the attack and it was co-operating with the Met Police.

Laura Russell, director of campaigns, policy and research at equal rights charity Stonewall, said the attack also showed “how much we still have to do for LGBT equality”.

She said: “Government research found that more than two thirds of LGBT people said they had avoided holding hands with a same-sex partner for fear of a negative reaction from others.

“This attack is a reminder of why.”

Health Secretary Matt Hancock called it “appalling”, adding “everyone has the right to love”.

This attack is a shocking reminder that even in one of the world’s most accepting and celebrated cities, there is still work to be done to protect LGBT people from harm.

Figures from 2018 from the Met Police showed that attacks on London’s LGBT community have almost doubled since 2014.

Last summer the government launched an LGBT action plan to improve the lives of LGBT people in the UK. Their research found more than two thirds of LGBT people said they had avoided holding hands with a same-sex partner for fear of a negative reaction from others.

As Ms Geymonat mentioned in her Facebook post, the start of June has seen the beginning of LGBT Pride month – a celebration recognised internationally since 1970.

With one of the biggest celebrations due to take place in the capital in just under a month, this is a sobering reality check of why Pride is still needed in 2019.

Siwan Hayward, director of compliance, policing and on-street services at Transport for London, described the assault as “sickening” and “utterly unacceptable”, adding that “homophobic behaviour and abuse is a hate crime and won’t be tolerated on our network”.

Police are appealing for witnesses for the attack which happened at about 02:30 BST on a N31 bus in West Hampstead.

There were 2,308 homophobic hate crimes across London in 2018, compared with 2014 when 1,488 were recorded, according to the Met Police’s crime dashboard.

Det Sgt Anthony Forsyth said there had been a “steady increase in the reporting of all hate crime”, which was partly due to the “growing willingness of victims to report crime and the improved awareness by police”.