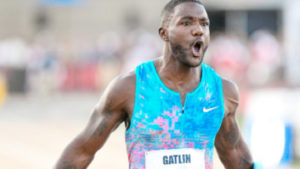 ST GEORGE’S, Grenada (CMC) – Reigning World champion American Justin Gatlin opened his 100 metres season with a victory at the Grenada Invitational on Saturday, making up for his absence last year because of injury.

The 36-year-old was timed at 10.05 seconds in winning the marquee event at the Kirani James Stadium, with fellow Americans Isiah Young (10.11) and Mike Rodgers (11.16) taking the lesser positions.

Gatlin had been expected to headline the inaugural meet here in the scenic Grenada capital but pulled out with injury.

Running out of lane three, he was unable to separate himself from the field over the first 50 metres but once he was into the drive phase, he eased ahead to beat fast-finishing Young to the line.

Gatlin produced a major upset last year at the World Championships in London when he beat legendary Jamaican Usain Bolt to win the 100m title.

His counterpart Tori Bowie, the reigning World champion, was also in winning form as she raced to victory in the women’s 100m, crossing the line in 22.75.

The United States also took honours in the men’s 200 metres when former World and Olympic 400m champion LaShawn Merritt claimed victory in a time of 20.57.

Trentavis Friday, also of the U.S., was second in 20.91 while the Dominican Republic’s Yancarlos Martinez took third in 20.93.

Merritt, in lane five, had competition over the first 80 metres as Friday, next to him in lane four, along with Trinidadian Emmanuel Callender and Guyanese Winston George on the outside, all ran strong curves.

Once in the stretch, however, Merritt pulled away from the field to take a comfortable win.

There was a clean sweep of the distance hurdles for Jamaica as Andre Clarke won the men’s event in 49.09 seconds and Yanique Haye-Smith captured the women’s race in 56.38.

Hometown favourite Bralon Taplin, who finished fifth at the Commonwealth Games in Australia earlier this month, snatched the men’s 400 metres in a time of 45.29, with Luguelin Santon of the Dominican Republic taking second spot in 45.66.