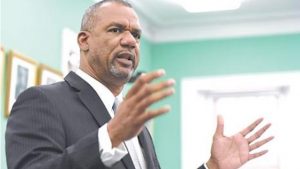 NASSAU, Bahamas — Following through on a commitment to table the Freedom of Information Bill before the end of the year, Bahamas Minister of Education Jerome Fitzgerald on Wednesday brought the long-awaited bill to the House of Assembly, but there will be no debate on the bill until the New Year.

The House of Assembly was adjourned to January 9, 2017.

The FOIA was one of the central issues raised by participants of a recent protest march, which saw hundreds of residents occupy downtown Nassau for over ten hours.

Acknowledging that the bill has been a “long time coming”, Fitzgerald said while there has been a lot said regarding the time it has taken to get the legislation to the House, the FOIA passed under the former administration was “rushed, did not have public consultation and was woefully short of international best practices”.

The act was passed in 2012, but the former administration never enacted it.

“Mr Speaker, I have learned that if you are going to do something, it is worth doing well, and this government was committed to giving Bahamian citizens a well thought out Freedom of Information Bill that could stand up against best practices,” Fitzgerald said.

“Mr Speaker, this was a process. It was not easy and neither was it a short process. It required many phases to ensure that it was not just satisfactory, but thorough and comprehensive.

“This has been almost three years in the making, and I am elated to finally be able to lay this bill before this House.”

Fitzgerald, who has ministerial responsibility for the FOIA, expressed disappointment with what he said has been a lack of public involvement with the committee’s work on the proposed legislation.

He said, “One would have thought that, given the importance of the bill and all the noise in the market regarding the FOI Bill, that the meetings would have been oversubscribed and that we would have had far more persons attending the town meetings.

“Sadly, Mr Speaker, that was not the reality. Scores of Bahamians missed an opportunity to be actively involved in framing a bill that will undoubtedly be of historic importance.”

In July 2014, Fitzgerald said it could take up to two years to implement a revised version of the FOIA.

The minister said the bill was in part delayed because of “unforeseen setbacks” caused by Hurricane Matthew, though the hurricane occurred long after the government was expected to complete the necessary consultation and amendments.

“Mr Speaker, Bahamians have much to be proud of, as we finally have a long awaited Freedom of Information Bill, which is relevant and adheres to international best standards based on our system of parliamentary democracy,” Fitzgerald said.

“Mr Speaker, before I close, I wish to make it clear that this is not the end, but merely the beginning.

“Once this bill is passed, there will be an education process. The public will have to educate themselves on the provisions of this FOIA.”