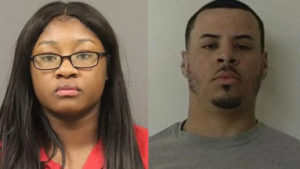 An alleged love triangle turns tragic one hour before the New Year.

“I mean, he was a soldier. He was a sergeant. That speaks volumes. That’s what I want everybody to remember him as, as Sgt. Hassel III,” says the victim’s father, Tyrone Hassel Jr.

Investigators say around 11 p.m., on NewHassel’s 22-year-old wife Kemia, also an active duty soldier and one-year-old baby were spending the holidays with his family. Family time was cut short when Hassel returned home with food for his wife. When he went back to his car investigators say 24-year-old Jeremy Cuellar, also an active duty soldier, allegedly shot Hassel leaving him for dead.

Now the Hassel family is left looking for answers.

“It’s been tough man on my entire family, you know we got a big family and even his mom’s side of the family, it affected everybody. big time,” Tyrone Hassel Jr., says.

Documents reveal all three were active duty soldiers at Fort Stewart. However Cuellar and Kemia we’re allegedly having an extramarital relationship. Investigators believe Cuellar drove from Fort Stewart to Chicago days prior and waited for direction from Kemia Hassel.

“Just wondering what type of person she really is, because she deceived us all, and I thought she was a completely different person than who she really is,” the father says.

They believe the motive for the two alleged lovers was to continue their relationship and get Hassel’s death benefits. News 3 learned Kemia did receive $100,000 from the government for her husband’s death.

Kemia Hassel had her first appearance in court Monday. She is charged with first-degree premeditated murder. She’s currently being held on a 2.5 million dollars bond at the Berrien County Jail.

“I grieved for her more than I grieved for myself. Because I saw a woman who just lost her husband. Looking at my grandson, I saw a kid that just lost his father, you know, not that I just lost my son. It’s tough, man,” Tyrone Hassel Jr., said.

Cuellar had his first appearance Tuesday in Liberty County. He is also charged with first-degree premeditated murder with a felony firearm. He’s currently being held at the Liberty County Jail awaiting extradition.