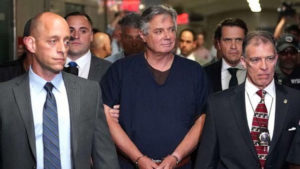 President Trump’s former campaign chairman Paul Manafort has been released from prison to serve the remainder of his sentence in home confinement because of concerns over the novel coronavirus, two sources familiar with the matter told ABC News.

An attorney for Manafort confirmed he had been released to home confinement but declined to comment further. The Bureau of Prisons also did not immediately respond to a request for comment.

Manafort, 71, has been serving out his more than seven-year sentence for charges related to special counsel Robert Mueller’s investigation in a federal correctional institution in central Pennsylvania. He was found guilty of tax fraud and conspiracy and was sentenced by a federal judge in March 2019. He was slated to be released from prison November 4, 2024. The charges stemmed from his work related to Ukraine between 2006 and 2015.

Manafort joined the Trump campaign in March 2016 as the campaign’s convention manager. He served as Trump’s campaign chairman from May 2016 until he resigned in August 2019.

The decision to move Manafort to home confinement comes after his attorneys wrote a letter to the Bureau of Prisons (BOP) last month requesting that he be immediately transferred to home confinement because he is at high risk of contracting COVID-19 because of his age and pre-existing conditions.

While there are no known cases of coronavirus at FCI Loretto, sources have told ABC News that the prison was an old monastery, and due to the open configuration of the prison, would be devastated by the virus.

In December, Manafort was hospitalized for several days due to what sources described as a “cardiac event.” He recovered at a local Pennsylvania hospital under the supervision of correctional officers. His lawyers say his pre-existing conditions include high blood pressure, liver disease, and respiratory ailments and add that Manafort contracted influenza and bronchitis in February 2020. Manafrot takes 11 medications daily, according to his attorneys.

“We write on behalf of our client to request that the Bureau of Prisons (“BOP”) immediately transfer Mr. Manafort to home confinement to serve the remainder of his sentence or, alternatively, for the duration of the on-going COVID-19 pandemic in accordance with Attorney General William Barr’s directives to the BOP on March 26 and April 3, 2020, and the Coronavirus Aid, Relief, and Economic Security Act (“CARES Act”), enacted on March 27, 2020,” attorneys Kevin Downing and Todd Blanche wrote in an April 13 letter obtained by ABC News.

Attorney General Bill Barr’s directive referenced in the letter encouraged the federal prison system to increase the use of home confinement for prisoners deemed in the “at risk” categories for coronavirus.

In a phone interview with ABC News in March, Barr stressed that there would be significant limits on what would make prisoners eligible for release to home confinement, noting that they could not be convicted of violent crimes or sex offenses — which makes up roughly 40% of the over-60 population.

“My main interest is making sure that they’re safe to the community and that the situation they’re going into is likely to be safer than staying where they are where they have ready access to doctors and we can keep them in isolation,” Barr said at the time.

Last month the Justice Department issued a clarification regarding its policy on releasing certain inmates into home confinement, after a series of conflicting messages sparked confusion and uncertainty among prisoners, attorneys and federal courts.

“[Bureau of Prisons] is at this time prioritizing for consideration those inmates who either (1) have served 50% or more of their sentences, or (2) have 18 months or less remaining in their sentences and have served 25% or more of their sentences,” federal prosecutors wrote in a court filing in the Southern District of New York last month. “As BOP processes the inmates eligible for home confinement under these criteria and learns more about the COVID-19 pandemic and its effect on BOP facilities, it is assessing whether and how to otherwise priority consideration.”

Manafort has served just under 30% of his prison sentence, however prison officials have wide latitude when considering these releases on a case-by-case basis.