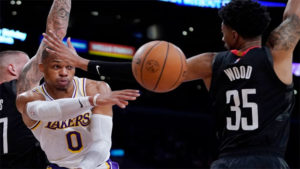 Big man Christian Wood had a double-double (16 points, 13 rebounds), but it wasn’t nearly enough for the young Houston Rockets versus LeBron James, Anthony Davis, and the loaded Los Angeles Lakers. The home team led by 19 points at halftime and largely coasted from there.

Rookie guard Jalen Green struggled, scoring just 7 points on 2-of-8 shooting (25.0%). The 19-year-old did contribute in other areas with 5 rebounds and 5 assists. Houston turned the ball over 25 times (led by 6 from Porter), more than doubling the 12 by Los Angeles. Between that and subpar shooting on 3-pointers and free throws, that kept Sunday’s game from getting close despite Houston’s late fourth-quarter push.