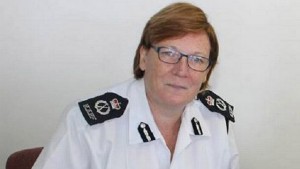 Amanda Stewart was under tremendous pressure after an interview with the Belfast Telegraph.

THE VALLEY, Anguilla, Thursday August 27, 2015 – Top cop Amanda Stewart has quit, after just a few weeks on the job, after incensing locals by making comments including that the island is “a village trying to be a country”.

She took up the five-year post on July 10, after retiring with 30 years’ service under her belt in her native Ireland. But comments she made in an interview with the Belfast Telegraph earlier this month didn’t go down well with the people of Anguilla.

Stewart – who was a commander in North and West Belfast in recent years during the Ardoyne riots – later took to Facebook to apologize for her remarks, claiming she had been misrepresented in the article.

She also issued a statement which was published in the local media and on the Facebook page of the Royal Anguilla Police Force, in which she said the journalist she spoke to had created “a political slant to the interview, which at no point in time did I intend, by changing completely the context of what I was actually saying”.

“If I have offended anyone without meaning to, I apologize. I feel that I have been completely misrepresented in the views expressed in the article as published.”

The apology did not quell local indignation, however, and Stewart subsequently went on sick leave citing “stress’’ before eventually quitting last week.

In her letter of resignation to the island’s governor Christina Scott, Stewart wrote: “As soon as I saw the article I issued an honest and sincere apology for any offence caused, but the personal criticism has continued. This has now affected my health and I have been left with no alternative than to resign and leave Anguilla.

“I am sorry that I have let people down who supported me and put faith in me to do this job.”

Stewart was the first white and the first female commissioner of police in Anguilla.

She and her ex-cop husband Donald have reportedly now left Anguilla and returned to Northern Ireland.