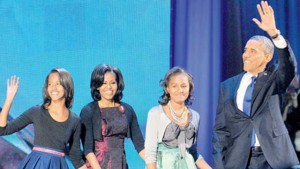 DES MOINES, Iowa (AP) — Former Arkansas Governor Mike Huckabee has accused President Barack Obama and his wife Michelle of parenting by double-standard, in an interview published Tuesday, saying they shelter their daughters from some things but allow them to listen to the music of Beyoncé.

While promoting his new book, Huckabee told People magazine, “I don’t understand how on one hand they can be such doting parents and so careful about the intake of everything — how much broccoli they eat and where they go to school … and yet they don’t see anything that might not be suitable” in the lyrics and a Beyoncé choreography “best left for the privacy of her bedroom.”

Huckabee described the Grammy Award-winning Beyoncé in his book as “mental poison.”

The first lady’s office declined to comment on Huckabee’s comments.

Huckabee recently stepped down from his role at Fox News as host of a weekend program. Having run for president in 2008, and considered running in 2012, Huckabee has said he’s weighing whether to seek the GOP nomination in 2016.

Huckabee is no stranger to such pointed statements. At a Republican National Committee meeting last year in Washington, he suggested Democrats wanted women to believe they were helpless without government-financed birth control.

“If the Democrats want to insult the women of America by making them believe that they are helpless without ‘Uncle Sugar’ coming in and providing for them a prescription each month for birth control, because they cannot control their libido or their reproductive system without the help of the government, then so be it,” Huckabee said. “Let us take that discussion all across America.”