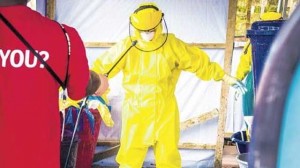 If 2014 is going to be remembered for anything in particular, it just might be the spread of Ebola in West Africa, and briefly into the United States. To give you some idea of the depth of emotion and media coverage that Ebola has received this year, TIME magazine named the “Ebola fighter” as its person of the year in 2014.

There’s little denying that Ebola is a serious and scary disease. Because of Ebola’s two-to-21-day incubation period, potential carriers may not know for some quite some time if they’re infected. This makes the quarantine of those suspected of being infected difficult, especially in regions of the world like West Africa, where the resources to quarantine and control diseases aren’t there.

There’s also the fact that the Ebola virus is proficient at killing its host. Based on data from the World Health Organization as of Dec. 24, there were 20,115 confirmed, probable, or suspected cases of Ebola that led to 7,857 deaths. In other words, Ebola kills two out of every five victims; but the actual number is potentially higher considering that the aforementioned 20,115 case figure includes suspected, but as of yet unconfirmed, cases.

The CDC just declared this disease an epidemic
Yet the Centers for Disease Control and Prevention, or CDC, wants you to know there’s a far more serious infectious disease ravaging the United States at the moment. In fact, this disease is so serious that the CDC officially declared it an epidemic earlier this week after 15 children died from it. This epidemic is none other than the flu.

According to the latest data from the CDC, the number of states reporting a high level of influenza-like activity has jumped to 22 states from 13 in the prior week, while the percentage of deaths associated with pneumonia and infectious diseases has risen above the cyclical epidemic threshold.

Additionally, the CDC reports that a vast majority of flu cases this year have been of the H3N2 subtype. As ABC News reports, the H3 subtype is the one most associated with flu-related deaths, signaling that we could be dealing with the start of a severe flu season.

Why we can’t just cure the flu
Some of you might be wondering why, if pharmaceutical research has advanced as much as it has, the flu still leads to many deaths and complications each year. There are actually multiple answers to this question.

To start with, researchers have to play a guessing game with regard to what flu strains are likely to dominate in the upcoming flu season. Because it can take weeks or months for vaccine developers to ramp up their production and make tens of millions of doses, they need to know what strains researchers believe will be prevalent months before the flu season starts. In other words, researchers are merely offering their best guesses. It’s an inexact science that’s amazingly been right more often than wrong; but it’s nowhere near foolproof.

Also, the flu isn’t static. Like any infectious disease, the flu strain can change over time, rendering the educated guesses of researchers wrong from time to time, and the vaccines developed by pharmaceutical companies as antiquated.

Vaccine development isn’t always profitable because virus mutations can render a vaccine practically worthless, and there’s also no guarantee that a vaccine will be purchased by governments around the globe even if it’s approved. The truth is that the innovation incentive sometimes just isn’t there.

The vaccine irony
What can you do to protect yourself? Although the CDC offers up numerous suggestions, each and every year, the top suggestion on its list is to get a flu vaccination.

Among standard vaccines, a flu shot has among the lowest adult participation rate. In a given year, only around two in five U.S. adults will get one. However, a flu shot is often strongly encouraged by the CDC for children, the elderly, and for those who have compromised immune systems, because they’re the groups most likely to be seriously affected by the flu.

Yet, here’s the interesting irony with the flu vaccine: It tends to have the lowest success rate on children, the elderly, and people with compromised immune systems. In reality, a flu vaccine is designed to protect younger, healthy adults in order to keep them from winding up in the hospital and getting a severe form of the disease. This way, hospital beds can go to children, the elderly, and compromised immune system patients who really need the medical attention.

For instance, the CDC’s 2012-2013 flu report noted a vaccine effectiveness (VE) rate of 56%, meaning more than half of vaccinated patients either remained flu-free due to the vaccine, or were kept from getting a severe form of the disease. By comparison, the VE for those aged 65 and up was just 9%. That might sound incredibly low, but it means close to one in 10 seniors was kept out of the hospital because he or she had been vaccinated. Considering that the elderly are responsible for the bulk of this country’s medical expenditures, I believe this demonstrates the benefits of getting a flu vaccine.

A shot at success
With a number of new quadrivalent vaccines hitting the market in recent years — quadrivalent vaccines are targeted at teaching the immune system to protect against two influenza A strains and two influenza B strains — and the CDC proclaiming the flu to be an epidemic, it could be a critical year for vaccine makers and their vaccines to shine… assuming consumers get a flu vaccine.