Foreign Minister Brantley In Jamaica For Meeting With Pompeo 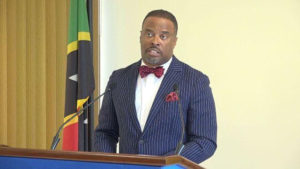 St. Kitts and Nevis will be represented at a gathering with United States Secretary of State, Michael Pompeo in Jamaica on Tuesday.

Foreign Minister Premier Mark Brantley left St. Kitts Tuesday morning for Jamaica where he will join other foreign ministers from Caribbean nations for discussions with Pompeo, who also is scheduled to arrive in Jamaica Tuesday. Pompeo is set to meet with Jamaica Prime Minister Andrew Holness ahead of holding discussions with the regional representatives.

The meeting has become a debating point on regional cohesion after Barbados Prime Minister and present Chairman of Caricom Mia Mottley said Saturday “As chairman of CARICOM, it is impossible for me to agree that my Foreign Minister should attend a meeting with anyone to which members of CARICOM are not invited. If some are invited and not all, then it is an attempt to divide this region.”

The governments of Grenada, Trinidad and Tobago and Antigua and Barbuda have expressed support for PM Mottley’s stance.

However, speaking with Freedom FM Foreign Minister Brantley said he does not understand how Caricom even coms into the picture as the gathering is not a meeting with Caricom. None of the three countries pursuing the “boycott” was invited to meet with Pompeo. He is slated to meet with representatives from Bahamas, Belize, Dominican Republic, Haiti, St. Kitts and Nevis, and St. Lucia.

“My understanding is that this is not a Caricom meeting. This is an invitation extended by the United States in its sovereign to a few of the Caribbean nations, which in their own sovereign right can determine where they will attend or not…in so far as comments about dividing Caricom, if it’s not a Caricom meeting then I’m not sure how Caricom even arises. In fact one of the attendees will be the Dominican Republic which as we know is not a member of Caricom. So certainly this is a horse of a different color and it is not intended in so far as I’m aware to be a forum for Caricom and that some of us happen to be members of Caricom doesn’t negate our right as sovereign states to engage bilaterally with any country that we so desire to advance the bilateral interests of our government and people.”

Freedom FM asked Premier Brantley as the representative of the St. Kitts and Nevis government what he hoped would be achieved by meeting with The US Secretary of State:

“As Foreign Minister of St. Kitts and Nevis my clear mandate from the Cabinet has been to seek to restore relations between the Unite States and St. Kitts and Nevis. I have been seeking to engage in the necessary efforts diplomatically to rebuild what is a long cherished relationship with the United States. The invitation therefore from Secretary of State Pompeo to meet in Jamaica affords me as the Foreign Minister, and by extension the government and people of St. Kitts and Nevis, an opportunity to engage with the United States at the highest levels and to discuss some of the outstanding bilateral issues that we have between our two countries.

“I think it’s an opportunity to advance bilateral agenda of St. Kitts and Nevis, an opportunity to have a conversation among friends and allies and as a consequence we decided that it is important that I attend and engage in those discussions with Secretary of State Pompeo in an effort to continue this march that we’ve been on of repairing the relationship between our two countries.”

Political watchdogs, including Grenada’s Prime Minister Dr. Keith Mitchell have expressed the view that the US is trying to shore up regional support for its attempted coup in Venezuela by skirting Caricom as a body and talking to a select few countries.