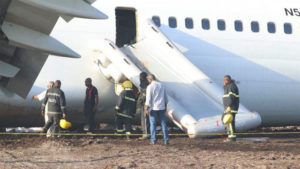 A Toronto-based law firm has filed a proposed class-action lawsuit against Fly Jamaica almost a month after one of the airline’s Canada-bound planes was forced to make an emergency landing at the Cheddi Jagan International Airport (CJIA) in Guyana last month, resulting in injuries to some passengers.

The lawsuit filed by Rochon Genova LLP last Friday seeks “just compensation to passengers and their families who have been harmed as a result of this dreadful accident”, a statement from the law firm said.

“A timely and fair resolution of this case is of critical importance to the victims and their families. Only a focused approach to this litigation, having regard to precisely what went wrong, can achieve this result,” said Joel Rochon, Managing Partner of Rochon Genova LLP, which has extensive experience in both aviation and class action litigation.

According to a statement from the law firm, the Fly Jamaica Boeing 757-23N aircraft was scheduled to depart the CJIA on November 9 at 1:30 a.m., for the Lester B. Pearson International Airport in Toronto, with 120 passengers, including two infants, and eight crew members on board.

“After a delay of approximately 40 minutes due to a technical issue with its front door, the aircraft took off. Approximately 20 minutes into the flight the pilot announced to the passengers that he was encountering an unspecified ‘hydraulic problem’ and would have to turn back. When the aircraft did touch down, the flight crew was unable to stop the aircraft on the runway, crashed through a perimeter fence and went over a sand berm, ripping off its right side landing-gear and engine. Passengers reported a chaotic evacuation from the darkened smoke filled aircraft,” it said.

“According to the Guyana Minister of Public Infrastructure in his report to the Guyana National Assembly, the flight crew did not declare an emergency with air traffic control prior to landing. As a result, emergency crash fire and rescue vehicles and personnel were delayed in their arrival at the crash scene, and passengers had to make their way back to the air terminal on their own.

“Due to the severity of this crash landing and the ensuing emergency evacuation, passengers suffered many injuries and lost valuable belongings. One woman died after the crash,” the law firm added.

The latter referred to the death of 86-year-old Guyanese Rookia Kalloo who passed away a week after the incident. Fly Jamaica has said it is “investigating” what led to her death. The family of the elderly woman had told local media that she was behaving oddly in the days that followed the incident, and when she was admitted to hospital after her symptoms worsened, they were told she had suffered a head injury.