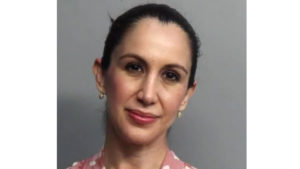 The John I. Smith K-8 Center teacher was arrested last week following an extended investigation by Doral police and the Miami-Dade School Board. Detectives involved with the case said that the victim was a former student of hers, while Calvi has refused to reveal how long she’s been pregnant for or who the father is.

Calvi was arrested on Thursday, October 7, and charged with lewd and lascivious battery, offenses against students by authority figures, child neglect, unlawful use of a communications device, contributing to delinquency, and possession of a firearm on school property. The investigation into the allegations were first launched in March, and were reported to J.C. Bermudez Sr. High School after a student allegedly showed other people a video of him having sexual intercourse with Calvi.

Authorities have indicated that searches on the student’s phone reveal he had sent nude photos to Calvi, who had also shared nude photos. They texted frequently, and they told each other “I love you” at least once. Her credit card history also revealed that she had spent money on the former student, and the conversations on WhatsApp show that the student recorded a conversation in which they told an unidentified person that they need to deny knowing what happened between Calvi and him.

“A child does not have the legal authority to give consent even though the child may say ‘this is OK,'” said Doral police spokesperson Rey Valdes. “The responsibility is on the adult. … You should trust your children, but as parents you should always be cognizant of what your kids are doing and who they are hanging out with.”

Calvi worked in the Miami-Dade school district for two decades, and was at John I. Smith since 2005. Authorities indicated that she had taken the student to locations outside of school, including Miami Beach.

“Miami-Dade County Public Schools is disturbed by today’s arrest involving inappropriate employee behavior. When the District was apprised of these allegations in March, the employee was immediately reassigned to a non-school site location,” the school district said in a statement. “The District will begin employment termination proceedings and will ensure the individual is prevented from seeking future employment with this school system. M-DCPS will continue to review its employee trainings to ensure that our workforce is fully aware of the District’s professional expectations of them and their ethical obligation to safeguard children.”

Calvi previously taught the student at John I. Smith K-8 Center, located at the same campus as J.C Bermudez High. She has since been released on $39,000 bond.