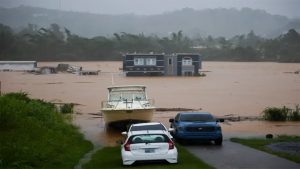 Images from local residents of the floods caused by Hurricane Fiona in Puerto Rico have been emerging.

Pastor Jorge Santiago of One Church Comerio filmed the fast-moving waters of the Plata river in Comerío on Sunday.

“It is approximately, maybe, 10 feet from hitting the bridge,” Santiago could be heard saying in his video. “This is crazy.”

Hurricane Fiona knocked out the power grid and unleashed floods and landslides in Puerto Rico, where the governor said the damage was “catastrophic”.

No deaths have been reported, but authorities in the US territory said it was too early to estimate the damage from a storm that was still forecast to unleash torrential rain across Puerto Rico on Monday.

Up to 30 inches (76 centimetres) was forecast for Puerto Rico’s eastern and southern regions.

Brown water rushed through streets, into homes and even consumed a runway airport in southern Puerto Rico.

Fiona also ripped up asphalt from roads and washed away a bridge in the central mountain town of Utuado that police say was installed by the National Guard after Hurricane Maria hit in 2017 as a Category 4 storm.