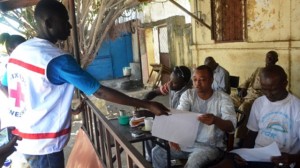 LONDON, (AFP) – Scientists in London on Tuesday unveiled plans to push ahead with clinical trials of prototype Ebola treatments in West Africa for the first time, possibly from November.

“Ebola treatments are to be tested in West Africa for the first time,” said the Wellcome Trust, a British biomedical research charity, which is funding the effort with a £3.2 million grant ($5.2 million, 4.1 million euros).

The charity said there had been some experiments with treatments already “but none has yet been tested for efficacy and safety in humans with Ebola” and scientists underlined that months of cautious work lay ahead.

David Heymann, professor of Infectious Disease Epidemiology at the London School of Hygiene & Tropical Medicine suggested that plasmapheresis, where serum is taken from survivors and their antibodies given to patients, could be a valuable tool in the battle to contain the epidemic.

“This would be a sustainable method of providing support to patients if it were effective, but unfortunately it has never been tested in a clinical setting, even though it has been used ad hoc many times,” he said at a press conference at Wellcome’s headquarters in London.

Heymann said that they hoped to collect enough serum for trials to begin once suitable sites had been identified.