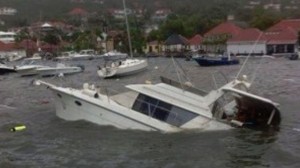 News Americas, MIAMI, FL, Weds. Oct. 15, 2014: The first death in the Caribbean of the 2014 hurricane season was recorded in St. Maarten Tuesday as Hurricane Gonzalo, now a category three storm, continued its path towards Bermuda.

Gonzalo was blamed for the death of an as yet unidentified elderly man who was aboard a boat at Simpson Bay Lagoon Tuesday, according to the St. Martin News Network. In St. Martin, there were reports of power outages and no water Tuesday even as residents reported flooding, losing roofs, doors and windows. The Network also reported 19 people remain unaccounted for, 16 from St. Barths and 3 from St. Martin. Boats were tossed about in St. Barths which also had flooded roads and downed trees.

The lagoon in St. Martin, meanwhile, lost 22 of the 37 boats, acting coast guard director Wendell Thode was quoted by the Associated Press as saying while officials in the nearby French Caribbean island of Martinique are looking for five people who were lost in the storm when their boat went adrift or ran aground during the hurricane.

Antigua and the British Virgin Islands last night reported they had largely been spared the wrath of Gonzalo and were open for business.

Apart from “some fallen trees and utility poles, the tourism plant of the twin islands were spared damage to buildings and infrastructure,” a statement from Antigua and Barbuda’s Minister of Tourism, Economic Development, Investment and Energy, Asot Michael said last night.

However, the Antigua Observer reported Gonzalo had caused “widespread damage to homes, crippled communication services and left several roads impassable” in Antigua but spared Barbuda, causing only flooding in some areas there.

The British Virgin Islands Tourist Board also reported no damage to date last night and said the hurricane and tropical storm warnings posed by Hurricane Gonzalo to the territory have been lifted.

Hurricane Gonzalo late last night, however, had strengthened further and was heading towards Bermuda with winds gusting at 125 mph. A hurricane watch remained in effect last night for Bermuda as forecasters at the National Hurricane Center in Miami said the storm could strengthen further today.