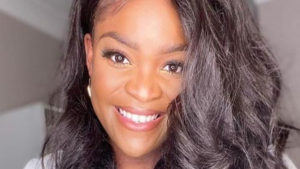 The Emerald Isle has crowned its first Black Miss Ireland.

Pamela Uba made history Sunday night by becoming the pageant’s first Black winner since the contest began in 1947. The 26-year-old former asylum seeker came to Ireland from South Africa when she was 7, according to the Irish Times.

Uba, the eldest of six siblings, is a part-time model and a medical scientist who has served as a frontline worker during the pandemic.

“I cried when I got my Irish passport,” she told the Times on Tuesday.

It was Uba’s mother who got weepy Sunday, said the soccer fan and once “nerdy” student.

“My mum, she was in absolute tears,” Uba said.

More honors for the brainy beauty queen appear to be on the way. Having achieved a medical-science degree in Galway, she is reportedly completing a master’s degree in clinical chemistry from Trinity College Dublin. It is at Galway University Hospital where she has tended to COVID-19 patients. Uba is headed to Puerto Rico in December to represent Ireland at the 70th Miss World competition.

Uba was named Miss Galway in March 2020 before the pandemic lockdown began. That honor, she said, came with some racist trolling.

“It’s horrible to hear people telling me to go back to my country when I’ve worked so hard to make Ireland my home,” she told the Times.

But according to Uba, being crowned Miss Ireland shows that regardless of the color of one’s skin or their place of birth, “the world is your oyster.”

Uba told the Independent she became interested in competing for the title of Ms. Ireland years ago while working in a nightclub that bills itself as Galway’s “ultimate Hen and Stag party venue.”

“I was in Coyotes working and one of the judges thought I was a contestant and so she encouraged me to try it out some day,” she said. “So that put it in my mind.”

According to a video Uba recorded after winning Miss Galway, her talents include singing and playing soccer. She said she looks forward to the Miss Ireland “journey” as it continues to unfold.