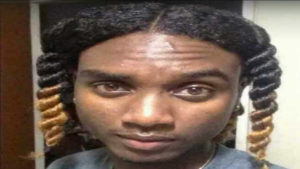 11 months after Tau Johnson died in fatal crash during a police chase, the Police High Command has issued a statement claiming the investigation into the circumstances of the incident has absolved the police officers involved of any culpability.

But this statement comes five months after the High Command Command says it received the official report from the Director of Public Prosecutions and one week after acting Commissioner Hilroy Brandy claimed the findings had been disseminated to the media months prior.

According to the statement dated June 4, and received by the media sometime after 4pm Tuesday, “In an official report received from the Director of Public Prosecution (DPP) in late January 2019, it was stated that based on the evidence provided from the independent investigation and the CCTV footage, the vehicle driven by the police officer was not driven in a manner which posed a danger to the deceased or members of the public. The police were in pursuit of the deceased who failed to comply with a siren request to stop.”

It went on to say “an independent vehicle examiner found no evidence that the vehicle made contact with the motorbike driven by the deceased and on the evidence available, there is nothing to suggest any careless, reckless, or dangerous driving on the part of the police officer. It is not recommended that any criminal sanctions be brought against the officer involved.”

The High Command did seek to explain the discrepancies in the comments of Acting Commissioner, saying it had been brought to the attention of the High Command that the information regarding the investigation was in fact not made available to the public, and apologized for the delay in releasing this information. It further noted that upon receiving the report from the DPP, there were certain legal stipulations which restricted its subsequent release.

The Acting Commissioner also claimed at a press conference that the findings had been communicated not to Tau’s parents, but to their lawyer.

Freedom FM investigations revealed that neither of the victim’s parents nor their attorney in a civil suit against the police received any such communication and had only heard about the determinations of the police investigation from persons who heard Brandy’s comments at the press conference.

Tau Johnson died July 7 after his motorcycle crashed along Wellington Road while he was being pursued by a police pickup. He was at the time celebrating his 20th birthday that very Saturday. The police investigation into the incident came after members of the public cried foul, claiming the police vehicle had clipped Tau’s motorcycle causing him to crash. Facebook comments on the police statement express public mistrust of the outcome of the investigation. Among the questions raised on the social media post is why the CCTV footage hasn’t been released to the public to dispel all doubts and rumors as to the police’s alleged involvement in the crash.