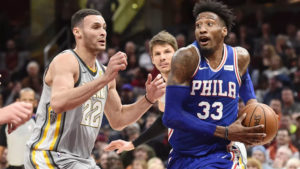 For Cleveland, a potential playoff preview could have went a little bit better.

The Cavs dropped Thursday’s game against the 76ers, a team they could see in the first round of the playoffs, by a final score of 108-97. LeBron James, who had 30 points, Larry Nance Jr., who had 13 points, Jordan Clarkson, who finished with 10 points and Rodney Hood, who had 11 points, were the only four Cavaliers to score in double figures. James also had nine rebounds and seven assists, while Hood started in place of the suspended J.R. Smith.

Joel Embiid scored 17 points for the 76ers, who were led by J.J. Redick’s 21 points. Cleveland never led Philadelphia in the loss.

To start the fourth quarter, with James getting his normal rest, the Cavs trailed by six after a 7-22 third quarter shooting performance. When James returned with 9:37 to go, the 76ers had extended their lead to a game-high of 11. 30 second later, after the Cavs’ turned it over on James’ first possession, the 76ers took advantage and pushed their lead to 13. The Cavs called a timeout.

The Cavs, though, were able to slow chip away at the lead with it culminating in a Kyle Korver three-pointer with 2:66 to go to bring the Cavs within one. 76ers forward Dario Saric, though, drained a corner-three pointer in front of the Cleveland bench to put Philadelphia back up by four. After Korver missed a running layup on the Cavs’ next possession, Embiid drained a fadeaway jump shot from the post to put the 76ers up six. The Cavs called a timeout with 1:28 to and never came within six points again.

The game got chippy late when Clarkson and 76ers forward Dario Saric got into an argument that resulted in Clarkson being ejected with 12.2 seconds to go.

As a team, the Cavs finished shooting 41.2 percent from the field and 29 percent from three. Cleveland next plays on Saturday at home against the Nuggets. Tipoff at at 7:30 p.m.