Ferries Docked Due To Rough Seas 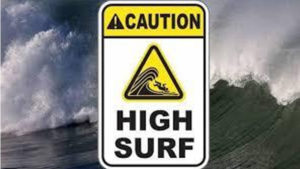 Rough seas continue to disrupt marine travel between St. Kitts and Nevis, forcing the closure of the Charlestown port and Basseterre Ferry terminal for a second consecutive day.

A high surf warning and small craft advisory has been in effect for the federation and other parts of the Leeward Islands over the past few days. According to the St. Kitts Met Office on Monday, seas are12ft with northerly swells reaching 8ft. As a result, small craft are cautioned to remain in port and beach goers to avoid the beaches due to dangerous surfs and rip currents.

On Sunday one ferry encountered difficulty while at the Charlestown pier when waves pushed the vessel into the pier. Freedom FM understands only the crew was onboard and while there was no structural damage to the pier, the ferry was damaged and is now at a boatyard in St. Kitts.

Manager of the Charlestown port Ken Pemberton told Freedom FM that due to the inclement weather conditions and in an effort to ensure the safety of passengers and vessel operators, operations at the Charlestown Port have been suspended until further notice. He said the sea condition around the pier was still extremely rough on Monday morning however an assessment will be made around midday to determine what action authorities there will take.

Mr. Pemberton said while ferries were given permission to use the Oualie pier, none have taken up the offer.

A high surf warning means that dangerous battering waves, with surfs of over 10 feet will pound the shoreline, producing life-threatening conditions.

The St. Kitts Met Office advises that possible or likely impacts include Loss of life as strong currents can carry even the strongest swimmers out to sea; injuries to beachgoers; beach erosion; sea water splashing onto low lying coastal roads; disruptions to marine recreation and businesses; financial losses; damage to coral reefs; salt water intrusion and disruptions to potable water from desalination.

The weak frontal trough affecting the area is forecast to subside over the next two days.