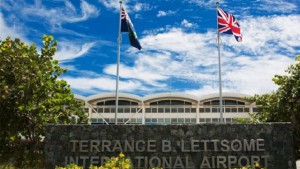 BVI NEWS ONLINE – Law enforcers in the British Virgin Islands (BVI) and overseas have launched a major investigation into reports that terrorists have disclosed plans to ‘blow up’ the Terrence B Lettsome International Airport and others located in the BVI.

Th Royal Virgin Islands Police Force (RVIPF) said it is investigating the reports along with the Federal Bureau of Investigation (FBI) based in the United States.

“I am aware of reports circulating on local social media channels about a potential terrorist threat to the territory.”

Meanwhile, a joint release from Acting Commissioner of Police Alwin James, as well as Managing Director of the BVI Airport Authority Denniston Fraser, stated that steps were taken this morning to review security at Terrance B Lettsome International Airport.

They said: “We have received information of a possible threat to airports across the Virgin Islands including Terrance B Lettsome International Airport, and we are working closely with the FBI currently on the matter. We cannot yet be sure that this information is credible. Meantime, we have reviewed and stepped up security at the airport and continue to look at public safety as our main priority.”

Travelers should be vigilant

The police and airport authorities, in the meantime, encouraged persons traveling to remain vigilant.

“The advice given to people traveling, at any time, is to remain vigilant. Should you see anybody acting suspiciously or see any unattended baggage, please contact a member of security staff or other airport personnel.”

“The authorities have stressed that it is business as usual but have recommended that passengers present themselves three hours before their departure to give themselves sufficient time during this weekend’s heightened vigilance,” added the RVIPF and the BVI Airports Authority.

BVI News Online has seen a report being circulated on social media that an ‘ISIS fanatic’ had threatened to ‘blow up’ the territory’s main airport tomorrow, April 15.

Here is a copy of the report being circulated about the alleged threat: