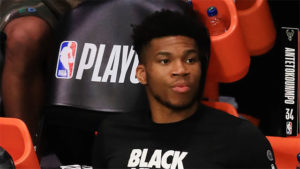 The internet was ablaze Saturday when NBA fans found out that Giannis had unfollowed all of his Bucks teammates and the organization.

Antetokounmpo now only follows nine people—four of which are his three brothers and mother.

Antetokounmpo now only follows nine people—four of which are his three brothers and mother.

After being bounced by the Heat in the second round of the playoffs, Antetokounmpo made it clear that he would not try to force his way out of Milwaukee. Yet, it’s starting to seem like these comments were merely politically correct responses to save face in front of the media.

Rumors have been brewing, claiming that Giannis is tried of being considered a regular-season hero. NBA insiders speculate that several teams would be suitable landing spots for Antetokounmpo when he becomes a free agent in 2021. But, it now looks like the player isn’t willing to waste another year of his prime as this unfollowing spree could be his way of trying to force the Bucks to trade him.